ITANAGAR, Jun 11: The Itanagar Municipal Corporation (IMC) has been failing to collect garbage from various markets, sectors and colonies of the capital region.
For the last many days, not a single vehicle has arrived at the colonies/sectors to collect garbage. The situation is the same in the market areas, where heaps of garbage remain unattended to. 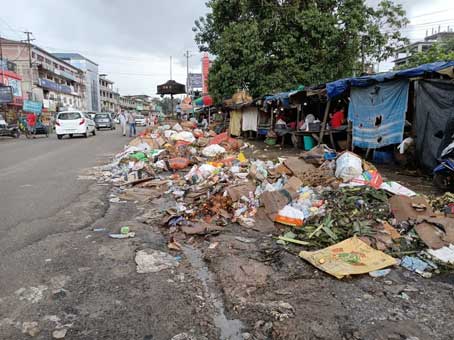 “We have repeatedly made calls to the IMC officials to collect the garbage but no one has turned up for the last many days. Besides looking ugly, the garbage dumped near the markets is a huge health threat,” said a shopkeeper in Naharlagun.
In Itanagar too, residents have alleged that garbage is not being collected from the colonies and sectors.
Meanwhile, IMC Executive Engineer Tadar Tarang informed that garbage collection has been affected due to fund issue.
“The IMC had four months’ dues for POL items at various petrol depots of the capital region. We managed to clear the dues for two months. However, the petrol depots have refused to issue diesel for the garbage trucks till the dues for the remaining two months are also cleared,” he said.
Tarang informed that he has apprised the higher authorities of the situation.
“Besides the dues for POL items, we also need to repair the vehicles. The IMC has 40 vehicles, but only 25 are on road now. The rest need repairing,” he said.
The EE said that garbage collection would resume in all parts of the capital region as soon as the POL dues are cleared.