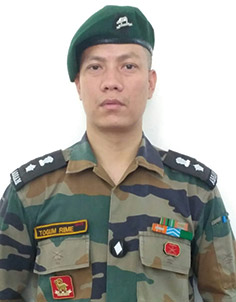 Staff Reporter
ITANAGAR, Jun 14: One more Arunachalee army officer, Major Togum Rime of the Assam Regiment, has been promoted to the rank of lieutenant colonel.
Son of late Kito Rime, of Rime village in West Siang district, Lt Col Rime did his schooling from the government higher secondary school in Itanagar, and graduated with English honours from Dera Natung Government College, Itanagar, in 2004.
He cleared the Combined Defence Services Examination conducted by the UPSC in 2005, and joined the Indian Military Academy, Dehradun, in January 2006. Rime was commissioned into the Assam Regiment as a lieutenant in June 2007. Currently, he is posted at Samba, near Pathankhot, in Punjab.
Elated by the news, Chief Minister Pema Khandu tweeted: “Proud of our Arunachalis serving in the Indian Armed Forces.
I congratulate Major Togum Rime on being elevated to the rank of Lieutenant Colonel in the Indian Army. My best wishes to Major Rime on his future endeavors and make all of us and our country proud always.”
Deputy Chief Minister Chowna Mein also congratulated Lt Col Rime on his elevation, and urged him to serve the nation with the highest integrity and devotion.