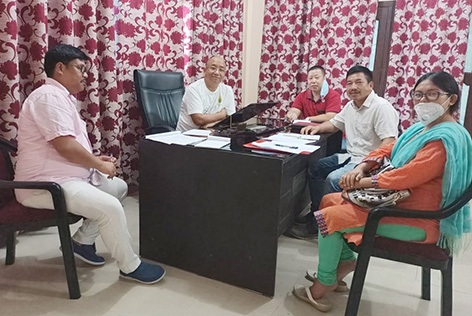 BORUM, Jun 15: Local MLA Techi Kaso chaired a meeting here in Papum Pare district on Monday to discuss the implementation of the government’s initiative to start 2000 nutritional kitchen gardens and one cluster farm in every assembly constituency.
During the meeting, Borum BDO Yakar Dawe, Yupia HDO Joram Bath and Yupia ADO Duyu Tado briefed the MLA on the roles and responsibilities of the departments concerned, and the operational guidelines for starting nutritional kitchen gardens and cluster agriculture/horticulture farms.
The matter of identifying 2000 beneficiaries for the kitchen garden programme and a plot for cluster farming (through participatory rural appraisal) within the given timeframe was also discussed.
In Tirap district, the administration convened a meeting at Bera village on Sunday for selection of a site for cluster farming under the MGNREGA.
During the meeting, Dadam BDO Pik Tayom highlighted the benefits of cluster farming, and advised the villagers to “opt for environment-friendly bio-fencing, instead of barbed wires to fence the selected site.”
Later, Tayom along with EO (RE) AK Tiwari, Bera chief Bewang Lowang, progressive farmer Kamnga Akhang, and others visited the site for cluster farming suggested by Khonsa West MLA Chakat Aboh.
A similar meeting was also held at Khela on the same day. Among others, DC Bhanu Prabha attended it. (DIPROs)