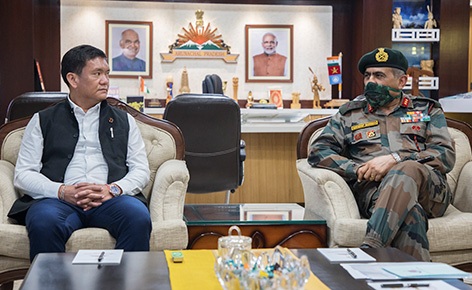 ITANAGAR, Jun 17: Assam Rifles Director General (DG) Lt. Gen. Sukhdeep Sangwan on Wednesday called on Governor B.D Mishra and discussed law and order, security scenario in eastern part of Arunachal Pradesh and the help being extended by the Assam Rifles (AR) against the Covid-19 pandemic.
During their meeting at Raj Bhawan here, the governor emphasized on promotion of sense of security amongst the people in the border areas, particularly Tirap Changlang and Longding districts through model conduct and appropriate deployment of troops.
He said that along with security drill in counter insurgency measures, the troops must contribute positively in the socio economic development of the rural areas.
Mishra, who had toured the eastern districts of the state intensively, suggested the continuance of the integrated approach of the AR troops, while dealing with rural communities.
He advised on strengthening bonhomie between the local communities and security forces.
Opening an Assam Rifles post at Gandhigram in Changlang district was also discussed for the confidence building measures amongst the local population.
The DG, who has his units in Tirap, Changlang and Longding districts, briefed the governor about the security apparatus and initiatives being taken to contain militancy in the area.
Later in the day, Lt. Gen. Sangwan accompanied by Brig. Tapan Lal Shah and Col. Rajesh Singh, met the Chief Minister Pema Khandu and briefed him of the humanitarian assistance extended by AR in Tirap, Changlang and Longding in battling Covid-19.
The head of the paramilitary force offered assistance in development of sports and education in the state.
The Chief Minister thanked the visiting army officers and lauded the Indian Army for being always first in responding to any crisis and in carrying out humanitarian services. (PRO to Raj Bhawan, CMO)