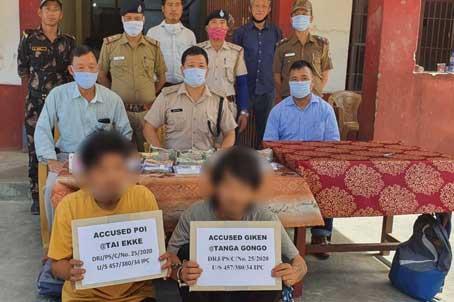 and recovered Rs 21,16,200 from their possession.
The recovered amount is reportedly part of Rs 22 lakhs the two had robbed from the house of a businessman here on Thursday.
The businessman had filed an FIR at the police station here on Thursday, informing that a group of unknown persons had forcibly entered his residence at around 3 am and had made off with Rs 22 lakhs the businessman had kept in his almirah, along with a mobile phone.
A case was registered, and a police team under the supervision of SP Taru Gusar swung into action.
Based on a tip-off it received on Thursday night, the team caught one of the alleged accused, identified as Tai Ekke, from Dumporijo, and subsequently the other alleged accused, identified as Tanga Gongo, was arrested from here on early Friday morning.
Along with the money, the mobile phone has also been recovered by the police.