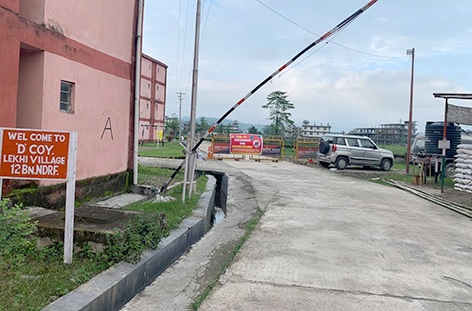 Staff Reporter
ITANAGAR, Jun 21: Fifteen National Disaster Response Force (NDRF) personnel have tested Covid-19 positive in the capital region, and have been shifted to the Covid care centre (CCC).
Reportedly, the first positive case was detected on 16 June. The person was symptomatic when his swab sample was collected on 15 June. He was among the personnel who had returned from West Bengal after concluding duties related to cyclone Amphan.
The Arunachal Times has learnt that, following the swab sample testing, the asymptomatic personnel were released after completing 14 days of quarantine, following the government’s 19 May order.
When a medical team stationed at the state quarantine facility in Lekhi visited the NDRF quarantine facility, it learned that none of the returnees had been tested.
Alarmed by the situation, the medical team collected swab samples from 25 NDRF personnel on 17 June. Out of these, 11 tested positive.
In the second batch, 80 swab samples were collected, out of which three more tested positive on 18 June.
Sources informed that so far nearly 150 swab samples have been collected from NDRF personnel and the results are awaited.
When contacted, an NDRF official denied the possibility of civilians getting infected by Covid-19 positive NDRF personnel.
The detailed information regarding the spike in the Covid-19 positive cases among the NDRF personnel was not initially reflected on the state’s surveillance portal.
One more person reportedly tested positive in the GREF cantonment area in Damsite, Naharlagun. He was shifted to the Lekhi CCC after confirmation.
It is learnt that the GREF personnel who have come from outside the state are not submitting to tests, going against the standard operating procedure (SOP) issued by the health secretary.
After the positive case was reported, a team of doctors visited the GREF cantonment in Damsite and put up a ‘containment zone’ poster there to caution the people in the vicinity.
The medical team’s action apparently irked the GREF authority, who shot a letter to the health secretary, stating that declaring the area as a containment zone would be detrimental to the organization.
Sources informed that there are returnees in the GREF cantonment who are yet to be tested. Among them is the GREF chief engineer’s daughter, who has a history of having travelled to Delhi, the sources said.
The health & family welfare department had issued an order on 19 May, stating that, as per the revised SOP, staffers of the central police and military forces and the Border Roads Task Force should be allowed to enter and bring labourers to the state for approved activities, such as road construction.
The health secretary had also stated that the “paramilitary establishment shall execute their own SOP for prevention of Covid-19 with 14 days’ mandatory quarantine in their own facilities.”
The order further stated that the government’s testing facility would be used only for testing those who develop symptoms of Covid-19 during the period of facility quarantine.
Meanwhile, four more persons have tested Covid-19 positive in the capital region, according to the health department.
All four are returnees – two from Assam, and one each from Uttar Pradesh and Madhya Pradesh. All of them have been shifted to the CCC.
On the other hand, six people have recovered from Covid-19 – four in East Siang district and two in the capital. They tested negative twice and have been advised 14 days’ home quarantine.