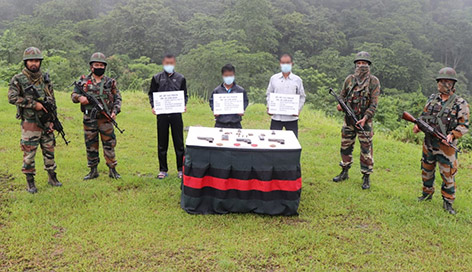 [ Pisi Zauing ]
CHANGLANG, Jun 26: Personnel of the 9 Assam Rifles (AR) and the 6 AR along with the Changlang police nabbed four ULFA (I) operatives from the general area of Shongko Havin in the early hours of Friday.
The operatives have been identified as self-styled (SS) sergeant major Tiksher Moran alias Arjun Asom (31), of New Kathalguri village, Assam; SS sergeant Arup Dowarh alias Anchon Asom (36), of Katharbari village, Assam; SS sergeant Surjeet Dowarah alias Khamon Asom (34), of Khamanpather village, Assam: and SS sergeant Jintu Asom (26), of Takuligaon, Assam.
Among other things, American-, Myanmarese- and Chinese-made pistols, three 0.32 mm magazines, one 7.65 mm magazine, three .32 pistol ammunition, one AK magazine and 20 AK ammunitions, eight SLR ammunitions, and two pairs of ULFA badges were recovered from their possession.
During preliminary interrogation, the operatives revealed that they were trained
at the Taga training camp in neighbouring Myanmar to carry out extortion activities and to sabotage the activities of the Indian security forces.
They also revealed that the reason behind the infiltration was to carry out subversive activities in Upper Assam and attack the security forces.
Cases were registered at the Lazu police station, and the operatives have been handed over to the police.