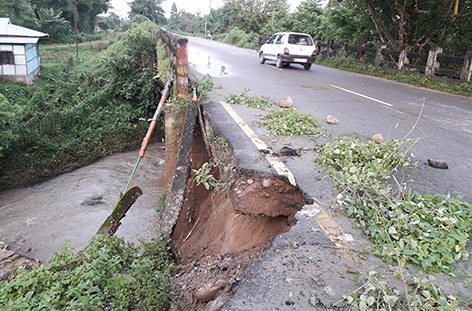 Correspondent
PASIGHAT, Jun 28: Road communication to Lipin and Maane villages from Korang circle headquarters in Lower Siang district is cut off for the last three days following massive landslides on 26 June.
As per reports, landslides triggered by torrential rain have blocked the PWD road in between Korang and Lipin villages. Landslides have also completely blocked the road that links Maane village with Korang circle headquarters.
Water and power supplies have also been disrupted in the area after rainwater breached the pipelines and derailed electric poles.
Lower Siang district BJP vice president Rari Riba informed that the affected villagers are facing hardships due to the disruption in supply of food and essential items.
Meanwhile, local leaders led by former anchal chairperson Pakyor Koyu have engaged men and machineries to clear the road. “However, it will take three more days to fully restore the road communication,” said Riba.
He said he has apprised the local MLA of the situation and asked him to initiate steps for restoration works.
In Ruksin, the Ruksin river eroded the wall (abutment) of the RCC bridge on National Highway 15, near the Ruksin petrol depot, on Saturday. Strong currents of the river damaged the abutment on the river’s right bank and eroded a portion of the highway.
Ruksin ADC Kabit Apang has informed the Pasighat highway division executive engineer about the erosion and sought early repair of the abutment.