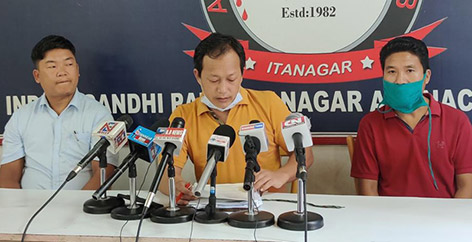 Staff Reporter
ITANAGAR, Jun 29: The Consumer Rights Organization-East Kameng (CRO-EK) on Monday claimed that massive malpractice and anomalies are being indulged in by the fair price shops (FPS) in East Kameng district.
Addressing a press conference here, CRO-EK president Beku Dolo alleged that the government-supplied PDS foodgrains are being sold openly in various parts of Seppa town at the rate of Rs 1,200 for a 50 kg bag.
“Such illegal sales cause shortage in the supply of the monthly allocation to the actual beneficiaries,” Dolo said, adding that a 50 kg bag of rice should actually cost Rs 150.
Dolo said the district administration should instruct the FPS owners to ensure proper distribution of PDS items to the actual beneficiaries.
“The owners should also not retain the ration cards of the beneficiaries after distribution of foodgrains,” he added.
“In order to ensure transparency and check illegality in the PDS, the CRO-EK demands formation of a vigilance committee and conducting social audit under Section 14 of the Arunachal Pradesh Food Security Act, 2015,” Dolo said.
In a memorandum submitted it submitted to the East Kameng DC recently, the CRO-EK sought “immediate action on malpractice in the government-supplied PDS in the district.”
In the memorandum, which it submitted on 15 June, the CRO-EK also demanded strict monitoring of the FPS’ under Section 10 of the Arunachal Pradesh Public Distribution System Order, 2016; formation of a vigilance committee to monitor all the FPS’; conducting social audit; and “strict vigilance on kerosene supply.”
The organization said the district receives around 42,000 litres of kerosene (SKO) supply. “But unfortunately, the retailers are not selling the SKO from their respective outlets to the consumers,” Dolo said.
He said that the government-supplied SKO, which is supposed to be sold from the respective outlets, “is being sold openly at the DUDA market in Seppa, at the rate of Rs 100 per litre.
“As per the Arunachal Pradesh Kerosene (Licensing & Distribution) Control Order, 2005, the district administration should direct all the outlet retailers that they ensure regularity in SKO distribution in their respective outlets with government-framed price,” Dolo said.
On being contacted by this daily, the East Kameng district food & civil supplies officer (DFCSO) did not comment on the allegations.