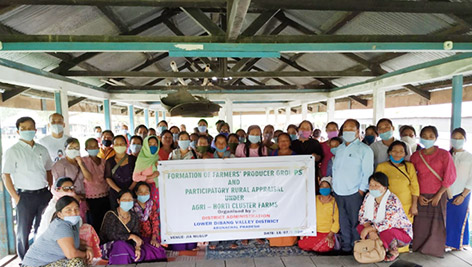 ROING, Jul 15: Lower Dibang Valley Deputy Commissioner Mitali Namchoom discussed roadmap to implement the agri-horti cluster farms in the district during a meeting with the farmers’ producer groups (FPGs) and the empowered committee members under agri- horti cluster farms at Jia village on Wednesday.
The DC informed that two schemes for development of agri-horti cluster farms and 2000 nutritional kitchen gardens in each assembly constituency have been approved by the state government to promote ‘vocal for local’, a campaign launched by PM Narendra Modi to make the country self-reliant.
She stated that women have been identified and encouraged to be the development agents in implementing the schemes.
“Priority is being given to women SHG members in beneficiary selection,” she said and appreciated the SHG members for supporting the government functionaries in implementing the schemes.
BMM (ArSRLM) William Lahary informed about the status of FPG formed in Jia village. He appreciated the zeal and willingness of the FPG members for implementation of the agri-horti cluster farms in their village.
DRDA PD Oling Lego explained in detail about the two schemes, which aim at making the state self-sufficient, especially in vegetable production.
DPO Marto Dirchi, ADO Toktil Modi and HDO N Tayeng also spoke.
The FPG members of various SHGs shared issues and challenges regarding agriculture activities. The doubts and confusions regarding implementation of the schemes were also cleared.
Earlier, the formation of FPGs was finalized. (DIPRO)