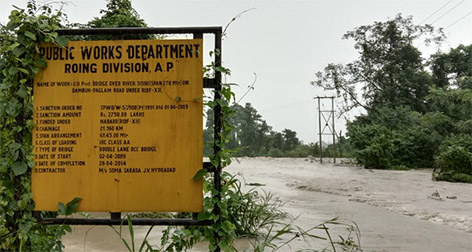 [ Karyir Riba ]
ROING, Jul 21: Overflowing water of the Sisiri river has started to enter many villages in Paglam circle in Dambuk subdivision of Lower Dibang Valley district, creating panic among the villagers.
Road communication to six villages in the circle has been cut off after the approach road to the bridge over the Sisiri river on the Dambuk-Paglam road was washed away.
Meanwhile, former Bomjir Anpum ZPM R Perme informed that the embankment of the state’s longest bridge – the Dibang bridge – has been damaged.
Overflowing water from the Sisar (Sisiri) river has inundated the PWD road and several houses in Bizari after breaching the bund at 10 Kilo point.
Surface connectivity between Roing and Pasighat has been cut off, causing hardships to the people, especially those with medical emergencies.
“The Dotung river has eroded a large area of ginger and wet rice fields. The affected villagers have dismantled their houses along with granaries, and are taking shelter at their relatives’ houses,” Perme said, and urged the state government to provide relief and rehabilitation to the affected villagers.
Perme said the people of the area are now at the mercy of nature.