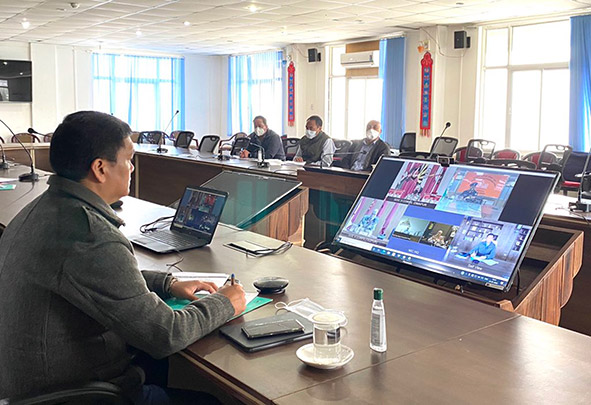 ITANAGAR, Jul 24: A revised standard operating procedure (SOP) for Covid-19 screening and management for the Indian Army, the CAPF, the NDRF and the BRO has been decided to be put in place for effective management of Covid-19 in the state.
The decision was taken during a videoconference convened by Chief Minister Pema Khandu and Health Minister Alo Libang with officers of the armed and paramilitary forces, the NDRF and the BRO on Friday.
The forces will have their own quarantine facilities and conduct rapid antigen tests of all returnees as per the protocol developed by the state’s health department and the ICMR.
Further, all the armed forces will appoint nodal officers in Arunachal for on-ground coordination with the home commissioner, who is the state government’s nodal officer, and district-level nodal officers will be appointed for the purpose.
The state government has assured to extend all support and facilitate rapid antigen and RT-PCR/TrueNat testing of all returnees of the armed forces. It also offered to train the medical teams of the forces in conducting medical screening.
Khandu lauded the team spirit and camaraderie between the civil administration and the forces, and offered full support from the state government’s end.
Chief Secretary Naresh Kumar, the commanders of 3 and 4 Corps, the NDRF DG, the ADGs of the ITBP and the BRO, the Jorhat (Assam)-based CRPF IG, and senior officers of the Assam Rifles and the state government attended the conference. (CM’s PR Cell)