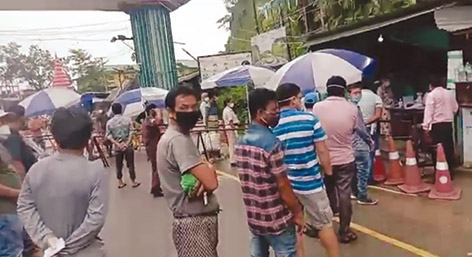 ITANAGAR, Jul 28: Twenty-one labourers summoned by the Food Corporation of India’s (FCI) food storage depot (FSD) in Karsingsa to work on various projects turned back from the Banderdewa check gate after a local person reportedly threatened them on Tuesday afternoon while shooting a live video for social media.

FSD Technical Assistant N Borah, who had arrived at the check gate to receive the labourers, informed reporters that the labourers were threatened of physical harm by a local man who was filming their entry.

“Labourers camped at the FCI complex in Karsingsa left a few days ago when cases in Nirjuli started increasing, and our operations stopped completely,” the official said.

“In order to resume work, the FCI director wrote to the deputy commissioner here, who granted permission to bring the labourers back to the workplace,” he informed.

“The order came out yesterday. And today, after following due procedure, we were making arrangements for getting the labourers tested when a local man started threatening the labourers in front of the police, and the labourers returned in fear,” he said.

The official said that the lack of labourers will affect food supply schemes such as the Antyodaya Anna Yojana, and the supply of primary and general household commodities, including the free rice distribution under the Pradhan Mantri Garib Kalyan Yojana (PMGKY).

“Under the PMGKY, 6000 quintals of rice have to be given to ICR and Papum Pare districts alone per month. With no labourers at the FCI, the work could not be expedited. Dispersing essential commodities from the FCI in Assam to the FCI in Arunachal will also be affected,” informed Borah.

The FCI official also said that “timely lifting of commodities is essential, and lifting a bag that weighs 50 kgs requires skilled labourers.”

ICR DC Komkar Dulom also informed this daily that the FCI had permission from the administration to bring in labourers for the food supply schemes.

“The labourers are tested and allowed to enter only when negative. They are quarantined inside their premises at the Karsingsa FCI depot,” he said, and requested that “the people consult the officials before making such reactions (on social media).”

Just before the local man allegedly threatened the FCI-hired labourers, one labourer had undergone rapid antigen test and was found to be negative. The rest of the labourers refused to enter, fearing the threats.

Meanwhile, the Arunachal Pradesh Congress Committee has reacted to the video on social media and said that “bringing labourers in large number from outstate without proper arrangement is not acceptable.

“Such relaxations will not only risk lives of netizens but it will also create burden on state in terms of machinery, resource mobilization, manpower, finance and health impacts,” it said in a release.