BOMDILA, Jul 30: The West Kameng police seized a truck loaded with illegal timber worth lakhs of rupees from here on the intervening night of 29 and 30 July. 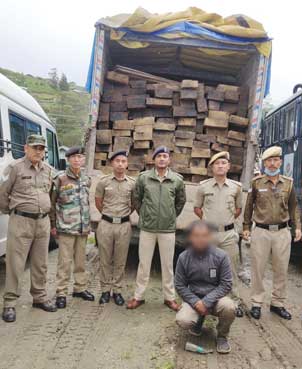 SP Raja Banthia informed that the seizure was made after a police team, led by PS OC K Dev, laid a naka on the night of the 29th after receiving “secret information that a truck loaded with illegal timber from Nafra may cross Bomdila on its way to Assam.”

The truck (AS-13C-3644) approached the naka at around 2 am, and the police team found that it was indeed loaded with illegal timber. The truck was seized, and its driver, identified as Passang Tamang, was arrested on the spot, the SP said.

“During interrogation, the arrested driver revealed that the seized illegal timber was loaded in Khazalang, Nafra, and was proceeding towards Bhalukpong, where the other party was to transfer the timber onto another vehicle for Assam,” Banthia said.

The DFO has been informed about the seizure, a case (u/s 379/411 IPC r/w Section 3/7 of the AP Forest Act) has been registered, and investigation is underway to find the other persons involved in illegal timber trade, the SP added.