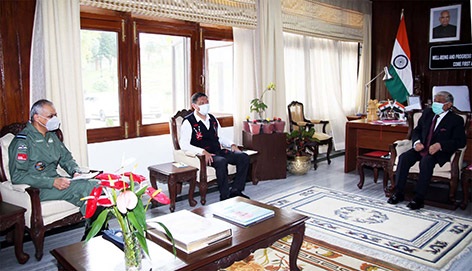 Mishra emphasized that the safety and security of the people must be the topmost priority in all matters.

“It is due to the benevolent assistance of the IAF that mobile connectivity has been installed in remote administrative headquarters of Vijoynagar and remote power stations in Hotspring and Rocham in Anjaw district,” Mishra said. He said the people of Arunachal Pradesh have very high regards for the IAF.

Khandu shared his observation on various security matters in Arunachal.

Air Marshal Mathur assured that the IAF would continue to support the state government in humanitarian services.

He also shared the competence of the IAF with the induction of new hardware and the operational requirements of the air warriors.

Later in the day, Security Advisor to the state government, Major General SC Mohanty paid a courtesy call on the governor at the Raj Bhavan.

The governor shared his concerns over the safety and security of the people of the state, Tirap, Changlang and Longding (TCL) districts.

He asked the security advisor to study the ongoing insurgency problems in the TCL district and advise the state government to take necessary steps to counter it.

Mishra said the well being of every individual is important for the state. He said that militancy has adversely affected the people’s livelihood and that steps must be initiated to stop the extortion activities by the insurgents at all cost.

The security advisor briefed the governor about the security scenario in the state. (Raj Bhavan)