ITANAGAR, Aug 6: Governor BD Mishra said that the youth of the world “must be brought up, groomed and instilled with the mantra of peace.” 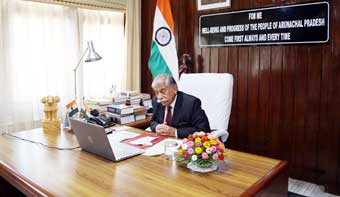 The governor said this after inaugurating an international webinar on ‘Hiroshima Day for peace in Gandhian perspective’, organized by Rajiv Gandhi University (RGU) on Thursday.

Participants from four continents took part in the webinar, which was held as part of a two-year celebration of the 150th birth anniversary of Mahatma Gandhi.

In his address, the governor said that, “like in the ancient Indian gurukulas,” the first lessons for the youths must be peace and goodwill.

Describing the devastations caused by nuclear bombs in the Second World War as “anti-human,” Mishra said it is the duty of every human being on earth to ensure that such calamities are not repeated.

He appealed to the participants in the webinar, including from the USA, Japan, Germany and South Africa, “to make a genuine effort towards peace in the world.”

Cautioning against “countries with expansionist mindset,” Mishra said that “peace is the inescapable prerequisite for development and progress.”

Reminding the participants of India’s contributions since the Vedic period to the 21st century, the governor said India has always demonstrated and promoted peace, prosperity and goodwill, and underscored that “despite many attacks to its culture, traditions and richness, India always has been the epicentre of peace and amity.”

He said it is now the responsibility of the present generation to ensure that “the next generation grows to love peace.”