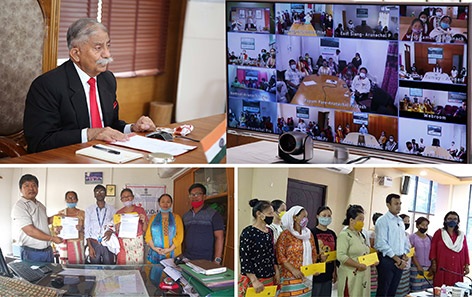 ITANAGAR, Aug 7: Governor BD Mishra interacted with weavers, artisans, entrepreneurs, and officials of the textile & handicrafts department through videoconference on 7 August, on the occasion of the 6th National Handloom Day (NHD).

The governor said that the handloom products of Arunachal, with their unique and distinctive designs and patterns, “are matchless, attractive and exclusive.”

He urged the people, particularly the womenfolk, to preserve, practice and promote local handloom for sustained socioeconomic empowerment of the women.

He also advocated a holistic approach in mitigating the challenges faced by the local weavers, artisans and entrepreneurs.

“The main objective should be to ensure employment generation, quality and quantity promotion of products, and increased financial returns for the people engaged in the textile and handicrafts sectors,” Mishra said.

He said officials must reach out to the people, advise them on startups and entrepreneurship, “and work with the artisans at every step of the trade cycle, including raw materials procurement at competitive prices, manufacturing ease, sales opportunities, and the returns to the artisans.”

The governor also said that the younger generation should be motivated and encouraged to practice traditional handloom, “taking advantage of the Covid-19 protocols and lockdowns.”

He acknowledged the suggestions for setting up an online portal and establishing emporiums and kiosks for traditional handloom and handicrafts at the airports, and asked the textile & handicrafts secretary to explore the avenues.

Textile & Handicrafts Secretary Swapnil M Naik announced the names of the best weavers and artisans on the occasion.

Meanwhile, the governor’s wife, Neelam Misra extended warm greetings to the weavers, artisans and entrepreneurs promoting handloom in the state. She also conveyed her good wishes to all the Arunachalee women engaged in traditional weaving.

Misra, who has herself been practicing loin loom weaving, said: “Loin loom weaving is one of the oldest indigenous artisan skills, or more appropriately a legacy passed down, generation after generation, to the womenfolk of Arunachal Pradesh.”

Expressing admiration for the variety in the designs and patterns of Arunachalee traditional weaving, she said “it is remarkable that every tribe in Arunachal Pradesh has its own colour and design symbolizing their distinct identity.”

Lamenting that modernization and changing social norms “are tending to alter the loin looms weaving tradition in the families,” she called for reviving it, “lest it leads to the disappearance of our indigenous arts and craft and severs the age-old family financial support source for the tribal ladies.”

Misra called upon the young women of the state, “more so the educated young girls,” to adopt the art, craft and skill of indigenous loin loom weaving as a hobby to carry on the social tradition.

“It should give pride to our young sisters; rather, it should become a fashion amongst the youth circle to claim that they are supporting and actively participating in our traditional weaving culture,” she said.

“Let us promote traditional weaving as advocated by Mahatma Gandhi, as a tribute to him,” Misra added.

In Tirap district, the Khonsa branch of the State Bank of India (SBI) handed over in-principle sanction letters to SHGs promoted by the North Eastern Region Community Resource Management Society (NERCORMP) in the district on the occasion of NHD, NERCORMP District Project Director (Tirap & Longding) Ruzing Bellai informed in a release.

SBI Branch Manager Pronob Biswas handed over the letters to Roshni SHG and Selenkong SHG for taking up handloom as an income generation activity, in the presence of officials of the NERCORMP, including Bellai.

The NERCORMP district project director said that “women SHGs should empower themselves economically through handloom activity with credit support from the bank,” adding that “‘development through credit’ is the new mantra of economic prosperity.”

Interacting with the beneficiaries, Dhawan advised them to utilize the sanctioned amount judiciously and properly. He also advised them to repay the loans on time. (With inputs from Raj Bhavan & DIPRO)