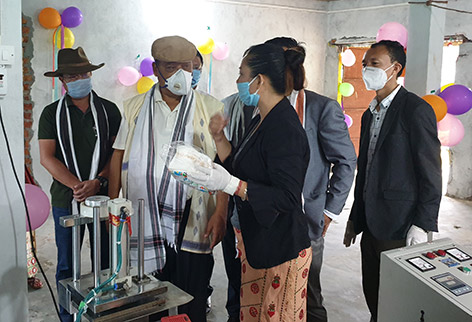 ITANAGAR, Aug 10: Advocating the ‘Vocal for local’ and the Atmanirbhar Bharat initiatives, Industries Minister Tumke Bagra on Monday appealed to upcoming entrepreneurs to set up manufacturing units to manufacture products locally in the state.

Attending the launch function of Pluvia, a manufacturing unit for paper plates, paper glasses and paper napkins, at Jully village near here, Bagra said that the state government has launched its own industrial policy, “which has many schemes to help and support willing and deserving educated upcoming entrepreneurs and skilled personnel of the state.”

“There are provisions for granting loans to start several types of industries and small and medium enterprises for manufacturing, production and job-oriented sectors,” he said, adding that the state’s people should seek to become “job givers, not job seekers.”

Stating that Arunachal should not depend on others but try to become self-reliant, Bagra said his department would provide support to entrepreneurs through various schemes.