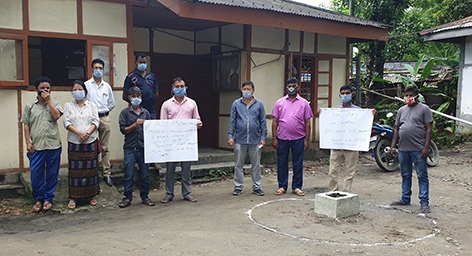 NAHARLAGUN, Aug 14: The casual staffers of the BSNL have been staging protests outside the office of the BSNL SDO (telecom) here since 10 August, demanding immediate release of their pending salaries.
The staffers said that they have not been paid salaries for the last 17 months. Many of the casual staffers have been working with the BSNL for the last 15 to 20 years.
“We have not been paid salaries for the last 17 months, which forced us to take this drastic step. Our protest started on 10 August, and we will continue till our salaries are paid. We also have families to feed, and the delay in paying salaries has made life miserable for us,” said one of the employees.
The employee claimed that the salaries have not been disbursed despite assurances from the BSNL authorities.
“The BSNL authorities keep reassuring us that the salaries will be paid, but already 17 months have passed. First of all, they never increase our salaries, and secondly, whatever we get is also not paid on time,” he said.
A large number of the casual staffers are non-APST, hailing from various parts of the country.
“The situation is worse for them. They have to pay house rent and feed the entire family. The local tribal employees at least have a support system, but the situation is really bad for the non-APST casual employees,” said another protester.
Reacting to the protest, BSNL General Manager Arung Siram said that the BSNL is unable to pay the salaries because of financial constraints.
“We forward their salary demand to the higher authorities and never keep the file with us. We regularly send reminders to the higher authorities. This problem is not related to Arunachal only; the situation is the same across the country,” said Siram.
He said that the salaries would be paid as soon as the payment is cleared by the higher authorities.
Siram informed that even the regular employees are not getting their salaries on time due to financial issues in the BSNL.
The BSNL currently has 272 casual staffers working across the state.
Our correspondent reports: The contractual workers of the BSNL in Lower Dibang Valley and Lohit districts are also on an indefinite pen- and tool-down strike since 3 August to protest the delay in disbursing of their salaries.
“The workers have been forced to go on strike as their wages have not been released despite repeated pleas and submission of representations to the higher authorities,” said Yalum Ama, president of the Lohit unit of the All Arunachal Pradesh Workers Union (AAPWU).
Reportedly, the contractual workers of the BSNL in Anjaw and Dibang Valley are also facing the same problem and are participating in the strike.
“It has become almost impossible for them to feed their families as the shopkeepers are also refusing to give them grocery items on credit. They are also not able to manage their children’s school admission fees,” said Ama.
Ama said that the contractual workers are already working for wages below the minimum wage fixed by the state government.
“The department is violating the Minimum Wages Act,” the AAPWU leader said.
Ama informed that some of the workers have been working at the Tezu BSNL office for the last 20 to 23 years, while a majority of them are working for the last 12 years.
Sources in the private firm that has undertaken the BSNL’s labour management confirmed that no fund has been released from the department’s corporate office for payment of wages.