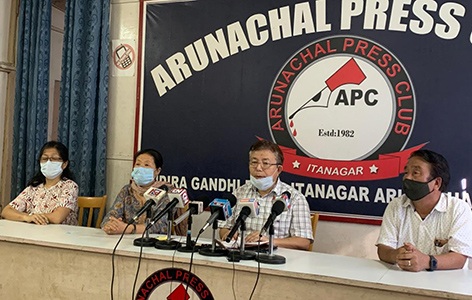 Staff Reporter
ITANAGAR, Aug 14: The Arunachal Pradesh Doctors’ Association (APDA) on Friday demanded that the state government release the doctors’ non-practicing allowance (NPA) and appoint DMOs and DRCHOs in adherence to civil seniority and fitness.
Addressing the media at the Arunachal Press Club, APDA president Dr Emi Rumi said, “There are five issues. They are: NPA, appointment of various posts in health department as per civil seniority and fitness; timely holding of DPC and three time-bound promotions; de-cadre of director of health service post; and engagement of unskilled contingency staff against the doctors appointed in 2008.”
Dr Rumi said that the central government gives four time-bound promotions to the central healthcare doctors but the Arunachal government gives three time-bound promotions. The notification was issued in October 2018, he said.
“Till now our doctors have not received the three time-bound promotions, which are long overdue,” Dr Rumi said.
“NPA as per the 7th CPC has not been given to the serving doctors by the state government,” in spite of the 7th CPC recommendations having been implemented by the state government, he said.
“We had also requested the government, many awards and medals given to our health fraternity doctors, but we are asking if the government is willing to give and recognize our works, we are asking for NPA instead of medals,” he added.
The APDA also claimed that there have been several appointments to the posts of DMOs and DRCHOs in disregard of civil seniority and fitness.
“We are requesting the government that, if any appointment and promotion is done, it should be done as per the relevant CSS rule and as per the civil seniority and fitness,” Dr Rumi added.