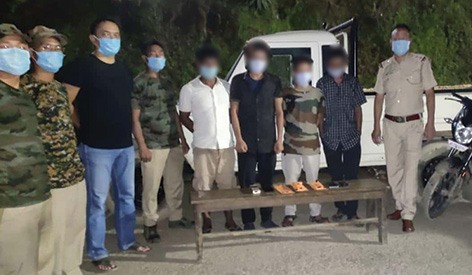 CHANGLANG, Aug 19: Six drugs peddlers were arrested from Longding and Changlang districts and approximately 151 gram brown sugar seized from them.

During spot interrogation, the drugs peddlers admitted that the brown sugar was purchased from Assam and brought up to Namdang check gate by their agents from Assam in a pick-up van carrying bricks, the SP said.

Later, based on disclosure made by the apprehended persons, the kingpin of the alleged drugs peddling Techom Tangha (49) was apprehended from Changlang town.

A case has been registered at Changlang PS under NDPS Act and further investigation is on.

Based on specific input about movement of drugs peddlers from Kanubari to Longsom village, the police laid a naka between Wanu and Banfera village.

The police intercepted a motorcyclist with a woman pillion rider. They were apprehended by police after a brief chase as they did not stop when asked to do so.

Reportedly, the woman took out a plastic packet from her handbag and threw it on the road. The plastic packet contained 10 grams of brown sugar, which was seized in the presence of CO T Ete and the Kanubari SDPO.

A case under NDPS Act has been registered and police launched further investigation.