ITANAGAR, Aug 20: The police department on Thursday issued a strong warning to people it said are planning to resort to violence during the 36-hour capital bandh from 27 August announced by the All Nyishi Youth Association (ANYA). 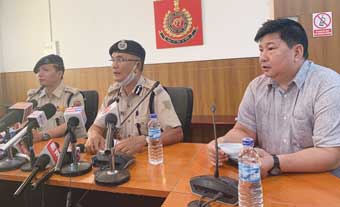 Rioters will be dealt with with an iron hand, the police said.

In a press conference held at the PHQ here, Inspector General of Police (Law and Order) Chukhu Apa informed that “some unscrupulous people and antisocial elements are planning to resort to large-scale violence and arson during the proposed bandh.”

“In a democratic country, the people have the right to vent their grievances in a democratic way. People do have rights, but it doesn’t mean that you have absolute right. There are some reasonable restrictions while venting our grievances. One should not take the law into their own hands,” the IGP said.

“Your peaceful dharna, the procession – these are all acceptable, but resorting to violence, taking the law into your own hands is absolutely unacceptable,” said Apa.

He added: “In the proposed bandh call, we are getting inputs from different sources that unscrupulous people and antisocial elements have pledged to repeat the PRC incident (violence).”

The IGP said the administration and the police department are taking the inputs seriously and are preparing the security arrangement accordingly.

Apa informed that the police department has mobilized adequate forces, and that some companies of paramilitary forces will also be deployed by the union home affairs ministry.

“No lives and properties are lost in the proposed bandh call, that’s what we are trying to ensure,” the IGP said.

He informed that the police are closely monitoring provocative messages, incitements, hate speeches, video clippings and false narratives on various social media platforms which have the potential to incite violence. Security agencies are looking into them and strong action will be taken against perpetrators, the IGP disclosed.

“This is a very pervasive world, but nobody can get away. Those who are posting such things should refrain from doing so because they are inviting legal action,” the IGP said, and urged the people to refrain from indulging in campaigns of hatred.

He informed that, for the first time, the police are going to go by evidence-based policing by using drones extensively for capturing videos and visuals, arming the officers on duty with body-borne cameras, and deploying photographers and videographers to help in investigation.

“Drones will be deployed in critical areas, and the officers will have body-borne cameras,” the IGP said.

Apa appealed to the people to maintain the state’s image of being an ‘island of peace’.

“The society should be cohesive, cooperative and love one another, and that’s how society moves towards development,” he said, and urged the ANYA and its supporters not to resort to any kind of violence.

“The assembly has to sit; that’s a constitutional responsibility. So, it has to take place. I cannot imagine the assembly being stalled and prevented from happening. That is unacceptable. In any case, the police force will put the best foot forward to ensure that the assembly is conducted peacefully,” Apa said.

On the PRC-related violence, the IGP informed that 10 cases were transferred to a special investigation team of the crime branch, nine persons have been charge-sheeted, and the trial will start.

“The police are taking it seriously,” he said.