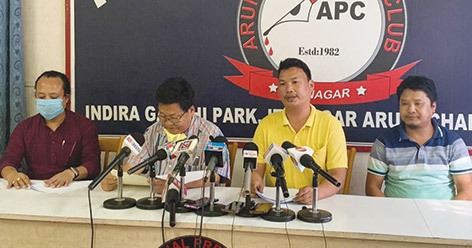 ITANAGAR, Aug 25: The All Nyishi Youth Association (ANYA) on Tuesday ‘deferred’ its proposed 36-hour capital bandh, stating that the government has fulfilled its charter of demands.

The decision to defer the bandh came after ANYA and Nyishi Elite Society (NES) members met Chief Minister Pema Khandu in his office at the civil secretariat here. It is learnt that the chief minister invited the ANYA and the NES on Monday to discuss the issues. Three ministers of the Nyishi community also attended the meeting.

In a joint press conference with the NES, ANYA president Byabang Joram said, “The state government has fulfilled our charter of demands, giving with authentic documents, that’s why we have decided to defer our proposed 36 hours bandh on 27-28 August.”

Joram said the government has furnished copies of its white paper on the state’s financial status, including the expenditure on Covid-19 management. On the offspring issue, a committee has been constituted under the chairmanship of health minister Alo Libang.

“On the APSSB job scam, the inquiry and action taken part is almost over, and the recovery of amount from the Trans-Arunachal Highway compensation scam is almost done,” said Joram.

He also said that the demands regarding district-wise job recruitment under the APSSB and GeM procurement have also been met and the cabinet has approved work order system of Rs 50 lakhs.

“Since the government has fulfilled our charter of demands, we decided to defer our bandh,” said Joram.

He refuted allegations that the ANYA team had a monetary deal with the government, and thanked the people for supporting the ANYA in its cause.

NES president Bengia Tolum said it was decided to defer the bandh as there were reports that unscrupulous and antisocial elements would try to hijack the ANYA’s bandh call to create law and order problems in the capital.

Justifying the NES’ insistence on the ANYA deferring the bandh, Tolum said, “Above all, the ANYA’s demands are fulfilled. At the same time, we care about the Nyishis’ image. If the ANYA goes for bandh call tomorrow, if some unscrupulous people and antisocial elements create violence, the ANYA would be held responsible. The ANYA means Nyishis.”

“We also care about the Nyishis’ relationship with other tribes and other people. That’s why we advised the ANYA to defer its proposed bandh. The loser will be the Nyishi community if anything untoward happens,” said Tolum, referring to the anti-PRC riots.

“Today we had a sitting with the government. During the sitting, the chief minister not only assured but also showed documentary evidences of further actions taken on the ANYA’s demands,” the NES president added.