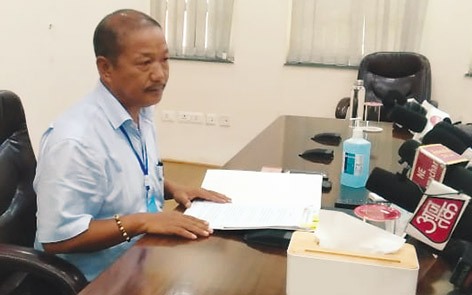 ITANAGAR, Aug 25: The state cabinet has decided to move a resolution in the coming legislative assembly to seek constitutional safeguards for Arunachal.

Home Minister Bamang Felix informed this during a press conference at the civil secretariat here on Tuesday evening. He termed the cabinet decision a “historic decision by Chief Minister Pema Khandu-led government for the constitutional protection of tribal rights.”

“The cabinet decision on constitutional protection was based on the deliberation of community-based organizations (CBO) during the consultative meeting on the constitutional safeguards for the indigenous people of Arunachal Pradesh, held on 19 August,” said Felix.

The home minister informed that all the CBOs asked that Arunachal be brought under the 6th schedule of the constitution.

“All CBOs asked that this state should be brought under the 6th schedule. We need to come together to seek constitutional protection,” he said.

Felix said the people of Arunachal were living under the misconception that they were constitutionally protected by the inner line permit regime. “However, the during the discussion we came to know through learned Additional Advocate General Kardak Ete that Arunachal Pradesh is not under the 6th schedule,” he said.

“Even under Article 371 (H), our state is called a tribal state. Even we are not the owner of our land and water. Considering this, the CBOs have recommended for single voice recommendation for constitutional protection of entire Arunachal Pradesh,” he added.

Felix said that the Khandu government is the first state government which set up a platform to hold broad-based discussions on constitutional safeguards for the indigenous people of the state.

He said the legislative assembly would ask that the special provision with respect to Arunachal be further strengthened by amending Article 371 (H) by inserting provisions for protection of religious or social practices of the tribes of Arunachal, customary laws and

The Khandu government recently faced unprecedented backlash after the Mon Autonomous Region Demand Committee submitted a representation to him, renewing the demand for Mon autonomy.

“With the resolution of the cabinet,” Felix said, “there would be no selective autonomy demand. Rather the state assembly would ask the Centre for uniform constitutional protection for the state of Arunachal Pradesh.”