This is a candid talk with mountaineer Taka Tamut, who has been conferred with the prestigious Tenzing Norgay National Adventure Award in the land adventure category.

Hailing from Jomlo Mongku village in Siang district, Tamut is the son of Talom Tamut and Yalang Tamut. He is currently in Itanagar to take part in the virtual dress rehearsal for the award ceremony to be held on 29 August. President Ram Nath Kovind will confer the award through the virtual mode from the Rashtrapati Bhavan. Tamut is in conversation with The Arunachal Times’ M Doley.

The Arunachal Times (AT): Thank you for taking time out of your busy schedule to reply to me.

AT: The questions are simple and straightforward. Can you tell me how and why did you choose mountaineering? 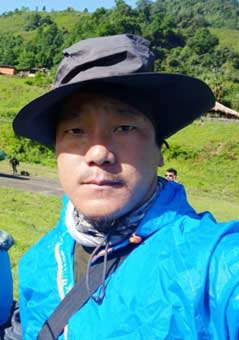 Tamut: I was attracted to mountaineering after reading the news about Everesters Tapi Mra, Tine Mena, Anshu Jamsenpa and their achievements in the newspapers, particularly The Arunachal Times. I thought if they can, then why cannot I. My sole aim at that time was to climb Mt Everest once in my lifetime.

AT: How are you feeling at being conferred the award?

Tamut: I am happier than ever before. It gave me immense pleasure and I am satisfied with it. I thank the sports and youth affairs department, particularly the then youth affairs director, DK Dinglow, the present Director Ramesh Linggi, the then adventure cell in-charge Dr Romeo Meetei, PHQ SP Apang Tamut, Siang DC Rajeev Takuk, and former Rumgong MLA Tamiyo Taga, who have always been supportive and encouraged me.

AT: Why do you prefer to dedicate the award to the media community of the state?

Tamut: I dedicated my award to all of my media friends of the state. They have always been supportive and encouraged me in my all endeavours. Without their support and encouragement, I would not have been here today.

AT: What difficulties did you face in accomplishing your primary goal?

Tamut: Mt Everest expedition has always been an expensive affair. I did not have enough money to embark on such an expedition. I went door-to-door, appealing to people to donate. I received overwhelming support from the community members and was able to purchase my mountaineering gears and equipment. The expedition, however, would not have been possible had the sports and youth affairs department not sponsored me. I thank the then youth affairs director Dinglow and present director Linggi for their all the support extended to me.

AT: Who have been your role models?

Tamut: Tine Mena, the first woman mountaineer from the Northeast to climb Mt Everest, is my role model. I was greatly inspired by her achievement. Besides her, all the Everesters of the state, the sports and youth affairs department’s then adventure cell chairman Romeo Meetei have been the great sources of inspiration for me.

AT: Who encouraged you the most to take up mountaineering?

Tamut: Romeo encouraged me to take up mountaineering. I started mountaineering in 2015, a year after completing my graduation in civil engineer (BTech) from the ICFAI University, Tripura.

AT: Where did you do your mountaineering training courses?

AT: You had been in the media limelight last year also for participating in rescue missions and search operations. Can you brief about it?

I also voluntarily took part in a search operation for a drowned man in Bhairavkund area of Assam’s Kokrajhar district in 2019, when I came across the incident while returning from attending a festival there. I was able to retrieve the body from the deep water after making 40-50 dives in the evening hours. The SDRF team engaged in the search operation had almost given up hope of retrieving the body. The SDRF highly appreciated me for rendering such a humanitarian service.

AT: Can you tell me the most memorable day of your life till date?

Tamut: It was when I, along with co-climber Kishon Tekseng reached the summit of Mt Everest in 2018 — a long-nurtured dream fulfilled. Unlike many other climbers, we did not take the help of the Sherpas during our expedition.

AT: Apart from mountaineering, what are your hobbies and interests?

Tamut: I love mountain terrain biking (MTB) and paragliding too. I took part in the MTB Nepal Biking Challenge in 2017, MTB Arunachal in 2017 and MTB Tawang during 2017-18. I make efforts to motivate the youths, especially school/college dropouts, to take part in adventure sports. I even hire bicycles for them with the help of sports and youth affairs department, so that they can take part in the MTB events. I go door-to-door and even force them sometimes to participate in such events.

I always try to use every single opportunity to promote adventure sports in Arunachal. I had organized a paragliding event in the last Pangsau Pass Festival. I have been regularly organizing awareness campaigns to promote adventure sports. I usually organize such campaigns in all the major festivals of the state, including the annual Tawang Festival, the adventure festival in Mechuka, the Ziro Festival of Music, and the Orange Festival in Dambuk in Lower Dibang Valley district, where displaying of gears and equipment used in mountaineering and various other adventure sports has been a part.

I make efforts to engage unemployed youths in adventure activities, so that they can at least earn a livelihood themselves from such sports and allied activities.

AT: As a mountaineer and emerging youth icon, what is your message for the youth of Arunachal?

Tamut: My message to the youth of the state is, whatever you decide do, do it with determination and dedication. Never succumb to pressure or let anyone distract you from your goal.