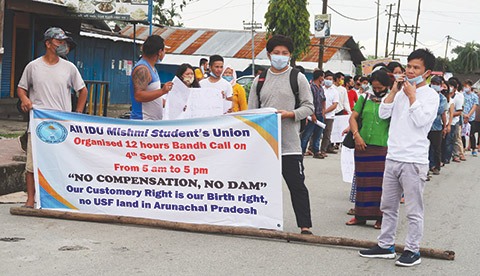 ROING, Sep 4: Members of the All Idu Mishmi Students’ Union (AIMSU), along with a large number families affected by the Dibang multipurpose project (DMP) took out a protest march here on Friday against the NHPC Ltd and the state government for their lackadaisical attitude towards the DMP compensation issue and the repeated filing of writ petitions by the NHPC at the Gauhati High Court, claiming the state’s land to be unclassed state forest (USF) that does not belong to any community or individual.

The protestors, who imposed a 12-hour bandh in Lower Dibang Valley (LDV) and Dibang Valley districts, shouted slogans, marched from the main market area with placards, and gathered outside the NHPC office here in LDV.

After repeated pleas, NHPC GM VP Rao arrived to interact with the AIMSU and the project affected families (PAF).

AIMSU general secretary Mompa Linggi demanded that the GM furnish a date or a timeframe within which the company would pay the compensation to the beneficiaries.

“You cannot hurt our tribal sentiments in the name of development. This is our ancestral land and no one can call our land USF,” said Linggi.

He reminded the GM that the AIMSU had always been anti-dam but had agreed to accept the project only because of the assurance of economic and societal development.

“What we got in return for our trust in the NHPC was a stab on our backs,” he said.

Linggi said if the NHPC is so interested in participating in “courtroom dramas,” it can very well scrap its project and leave.

“We will have you ousted because money is not as valuable to us as our ancestral land is,” Linggi said.

One of the PAFs said, “We do not want to listen to anything else. We just want a simple answer to whether compensation will be paid or not, and if yes, when will it be paid? We also demand that the petition should be withdrawn from the court. We did not decide to accept your project and give you our land so that you can go to court against us but because we need development in our area.”

Dibang Multipurpose Project Affected Committee (DMPAC) acting president Nogoro Melo said, “We need a solution regarding this issue, and for that we have umpteen times approached the state government. However, the government along with the NHPC and the DCs of both the districts has been filing nonsensical affidavits against us poor beneficiaries.”

Responding to the crowd, the NHPC GM said that the project would become unviable because of prolonged delay.

“After the withdrawal of the case, reassessment for compensation was not done by the DCs, leading the company to go back to the court as it wants the project on track,” he said. The GM further said that, because land is not classified in Arunachal, USF belongs to no one.

The AIMSU later sealed the main gate of the NHPC’s premises and warned that it would resort to “other means” if its demand is not met within a stipulated time. It also demanded that work on the project be halted until a solution is found.

The DMPAC had on 18 August served an ultimatum of 15 days to the NHPC to resolve the compensation issue.

All shops and offices were closed and vehicular movement was absent during the 12-hour bandh imposed by the student bodies of LDV and Dibang Valley districts.