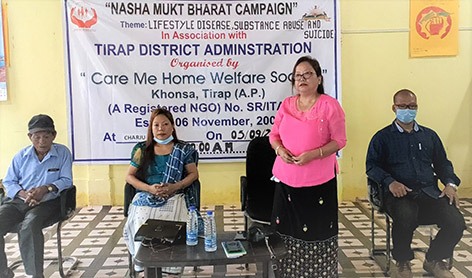 Tirap is among the 272 districts of the country identified as the most vulnerable to drug abuse by the social justice and empowerment ministry.

Tirap WCD Deputy Director Hacham Bangsia, who launched the campaign in the district, said the drug-free India campaign is an effort of the ministry to eradicate the menace of drug abuse and reduce drug demands.

She informed that ‘Care Me Home’ will be the partner NGO during the campaign, which will further coordinate with various other NGOs in the district.

GDMO of the general hospital here, Dr Sompha Sumpa explained in detail on the harmful effects of drugs abuse, including physical and psychological effects, on the users. He appealed to the people of Tirap district, particularly the youth to shun opium, called kaani locally, and other narcotic substances to make Tirap a drug-free district.

Chief functionary of Care Me Home NGO Sontung L Bangsia informed that the campaign, which was e-launched by the central government last month on the occasion of International Drugs Abuse and Illicit Trafficking Day, would continue for one year in all the 272 affected districts.

On behalf of the NGO, she assured to extend full cooperation to the district administration and department of social justice and empowerment to carry out the awareness campaign.