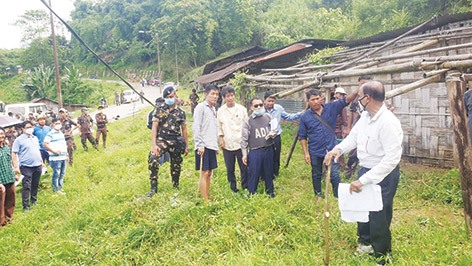 Large numbers of people have reportedly encroached on the land belonging to the police department.

Potom along with officials of the land department and the police conducted the drive.

“The high court has given order for demarcation of the area. Based on the order, today the marking and demarcation of land is being done. Notices were served and several hearings were conducted. After following the due process, the eviction drive was started,” informed Potom.

He said the court battle between the encroachers and the government started in 2011.

He said a total of 340 acres of land was acquired by the UD department but 90 percent of the land has been encroached on.

“We are trying to get back as much land as possible from the encroachers. Unauthorized occupants will be evicted, come what may. Law is very clear,” added Potom.

He said it would take at least three days to complete the eviction process. Potom also said the safety and security of the IRBn personnel would be compromised if civilians lived on their campus.

Regarding the encroachment on the highway, Potom said action would soon be initiated in this regard.

“Notice has been served to people who have encroached NH 415 from Hollongi upto Banderdewa. The eviction will be first carried out on the stretch between the Hotel Todo and Papu Nallah in the next few days. Vendors have constructed illegal structure on the drains,” informed Potom. He said action would be initiated on the entire stretch from Hollongi to Banderdewa.

“Even those occupying sector roads will not be spared. We will not compromise with it. Everyone should extend support to keep the capital complex beautiful,” said Potom.