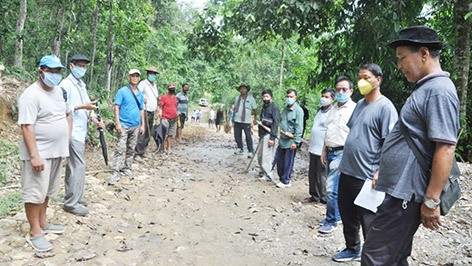 AALO, Sep 8: A dilapidated road which was being repaired by the villagers of Darka in West Siang district opened for vehicular traffic on Tuesday.

This road is considered the lifeline of the village as it connects vast areas of cultivation fields and important establishments in Darka village with Aalo town, besides shortening the distance by three kilometres.

The foundation stone for the steel bridge connecting the road was laid by the then chief minister Mukut Mithi in 2001 and the bridge was inaugurated by former chief minister Dorjee Khandu in 2008.

Since then, it was lying in a dilapidated condition as large portions of culverts and roads were eroded by rain over the years.

and the Darka Aalo Welfare Society decided to repair the stretch of the road voluntarily.