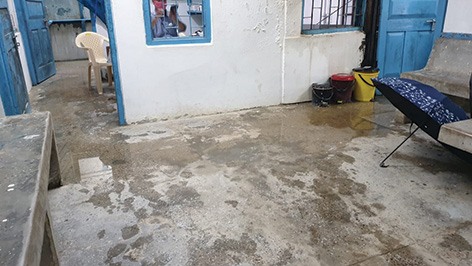 ITANAGAR, Sep 22: The Itafort urban primary health centre (UPHC) here is facing a serious problem of water seepage. Whenever it rains, the rainwater seeps inside the building, making life miserable for the patients as well as the UPHC’s staff.

“Just in half an hour of rain, the water seeps inside most of the rooms. The condition of the building is bad. We have several times informed the higher authorities about the problem. Occasionally some kind of repair work is carried out, but no visible changes till date,” said an employee of the UPHC.

The pathetic condition of the UPHC is baffling, considering that it caters to the needs of a large number of people.

“The public as well as the health workers are facing a lot of problems. The tall claim of the government giving top priority to the health sector has been exposed with the poor condition of the Itafort UPHC,” said a visitor.

Further, the hospital’s employees informed that equipment and medicines are also getting damaged due to the seepage of rainwater.

“Even the walls are getting damaged. The authorities had even visited the hospital and had assured of help. But the situation has not changed for the last many years,” said an employee.

Responding to the query over the poor condition of the UPHC, Itanagar Capital Region DMO Dr M Perme said he is aware of the situation.

“The MO in-charge had submitted a report to me in this regard, which was duly forwarded to the higher authorities. However, for the last six months, everyone has been busy with battling Covid-19. I will follow up on the file and look into the concern,” assured Dr Perme.

He informed that, in the long run, the Itafort UPHC will be converted into a community health centre to cater to the growing needs of the population.

“We have suggested demolishing the existing building, which is quite old, and constructing a new G+ RCC building. This hospital is very important as it caters to a large section of the population of Itanagar,” added Dr Perme.