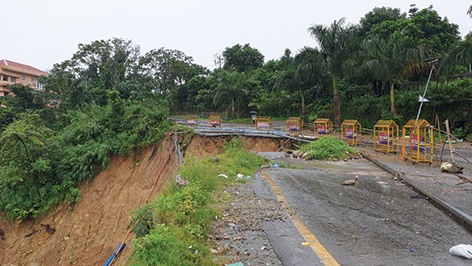 ITANAGAR, Sep 23: The state PWD has worked out an action plan to restore the two major stretches of Ganga-Jullang and Niti Vihar VIP roads which have been badly damaged in the monsoon.

Briefing the press here on Wednesday, PWD Chief Engineer Katung Wahge informed that survey and assessment has been done and the state government has already been intimated about it.

“The plan is ready for restoration of both the roads. We will go for a permanent solution.  We are waiting for the green signal from the state government,” said Wahge.

He also said “a prolonged monsoon has affected the plan of action.”

“This year the monsoon has been longer than usual. The capital has suffered the most from the effect of the monsoon rains,” he said.

Further, the chief engineer blamed man-made disasters for damage to both the stretches of roads.

“It is purely man-made damage. We had informed the administration in advance about it and had sought action for people damaging the road due to illegal earth cutting. But there has been no response,” the CE added.

“A portion of road was washed away in the month of July but no attempt has been made to restore the road till date. It is a very important road for the capital as it provides alternate routes and decongests the NH-415. People are facing a lot of problems and we request the government to immediately start the restoration work,” said the former councillor.

She further appealed to the government to “at least construct a temporary bridge so that people can cross by foot.”