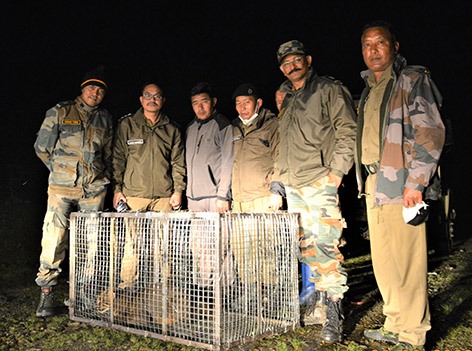 TAWANG, Sep 29: A rare male golden cat (Catopuma temminckii) listed under Schedule I of the Wildlife Protection Act, 1972, was found trapped in steel wire inside the “ammunition point JD” in Zong here, at an altitude of 10,400 ft, according to RFO Tage Haniya.

The golden cat was rescued by officials of the social forestry division here on Monday.

A team of forest officials, led by Haniya, Dr Sang Khandu of the veterinary department, and Zong APJD OC Maj Nitin Sharma rescued the animal and released it immediately into the nearby forest.

The golden cat was healthy, with no injury mark on its body.

“The rare and elusive golden cat, which is found in the forests of Arunachal, differs in various colour morphs which vary according to season. This particular individual exhibits the grey colour morph. The rescue operation was successfully conducted because of timely information delivered by army and the district administration of Tawang,” informed the RFO in a release.