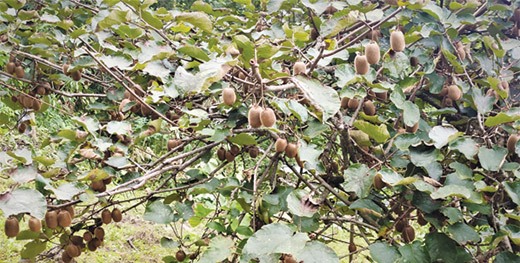 KHONSA, Sep 30: The department of horticulture in Tirap district harvested 500 kilos of the kiwi fruit at Thinsa on Wednesday, which will be “sold at a reasonable cost of Rs 100 per kg.”

DHO Tobom Bam informed that the kiwis of Thinsa will be put up at sale counters that have been earmarked at the Khonsa Bazaar.

Initially, the kiwi garden was named ‘Multipurpose Nursery, Thinsa village’ wherein 100 different varieties of kiwi, such as Bruno, Hayward, Elison, Monti and others were planted in one acre of land.

“This year, around 500 kgs of kiwi has been harvested from Thinsa village horticulture department kiwi garden which is the first time in Tirap district,” he informed.

Attending the harvesting, ADC Hq Kretkam Tikhak appreciated the horticulture department, headed by DHO Bam and HDO Hq Tolong Sumnyan and for harvesting the kiwis on a large scale.

He also urged the DHO Khonsa and his subordinate officers to encourage the farmers of other villages of the district to grow kiwi gardens for sustainable source of income.

Responding to the ADC’s query regarding financial involvement in establishing a similar kiwi garden, the HDO said that “an amount of Rs 6 lakh (approx) will be required for setting up a kiwi garden in one acre of land.” (DIPRO)