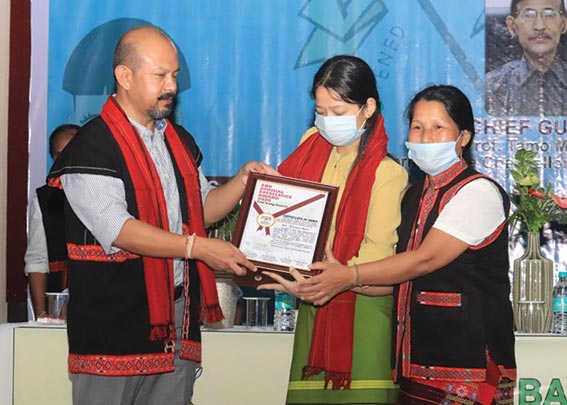 PASIGHAT, Oct 3: Twenty-one personalities and meritorious students were awarded by the East Siang district unit of the Adi Baane Kebang Academic Board (ABK-AB) during its Annual Excellence Award-2020 function held at the CHF auditorium here in East Siang district on Saturday.

Among the 21, five government employees, including two doctors, were awarded in recognition of the philanthropic services they are rendering during the coronavirus pandemic. The other awardees are two researchers (for earning PhD degrees) and students who performed meritoriously in the secondary examinations and qualified in various entrance tests. All the awardees were felicitated with mementoes and commendation certificates.

Attending the ceremony, former vice chancellor of Rajiv Gandhi University, Tamo Mibang advised the student community to “utilize every moment of the day in career-building activities.” He also urged the parents to take proper care of their children.

Stating that the young students are the future of the country, Mibang asked the state’s legislators to take steps to adequately fund the education sector.

“The state government should adopt a policy to enrich the students with science and technical education, so that they can exploit the rich natural bounties in the state,” he said.

Among others, Pasighat ADC T Borang, CHF Dean Dr BN Hazarika, and functionaries of the ABK (Apex) and its district unit attended the ceremony.