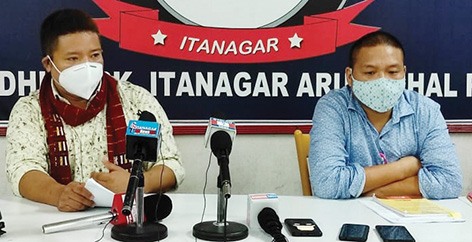 ITANAGAR, Oct 6: Claiming that private companies and corporations are “grabbing land rights of the indigenous people” of the state, the Save Arunachal, Save Indigenous (SASI) has asked the state government to come out with a clear definition of ‘community land’, and sought justification vis-à-vis the unclassed state forest (USF) disputes and forest land.

Addressing reporters at the press club here on Tuesday, the organization’s spokesperson, SD Loda said that “the NHPC in collusion with some vested leaders of the state is trying to snatch the land rights of the indigenous tribes of the Dibang belt by delaying compensation payment by citing USF issues.”

He said that “the corporation is raising unnecessary dispute that all the community land in Arunachal Pradesh is forest land and the indigenous people of the state have no right over their ancestral lands and forest.”

The organization also sought immediate payment of the “already awarded compensation” which has been pending due to the USF.

“As per law, the district collector, with due approval from the land management secretary, ought to award the compensation to the indigenous people, but the office is creating many disputes, like passing and recalling orders every now and then. The unnecessary orders passed thrice by the land management secretary with regard to compensation in the Dibang multipurpose project are in contradiction to Section 37 of the Land Acquisition, Rehabilitation and Resettlement Act, 2013,” he said.

“The issue of the USF has come out from the Dibang compensation matter, but this is not only a matter that concerns the eastern belt; it is the same for the entire state. If all the land is notified under USF, then none of us will be able to claim the ancestral property that has been passed down to us through generations. The state government should clearly state that there is no USF and the land belongs to a particular clan or community,” Loda said.

Requesting for appropriate against such developers, SASI president Debia Muj said that the people of the state are unaware of the USF and that companies/corporations from outside are taking advantage of it.

“Indigenous people should have a right over their ancestral property, for which the state government should clearly define community land,” he said.