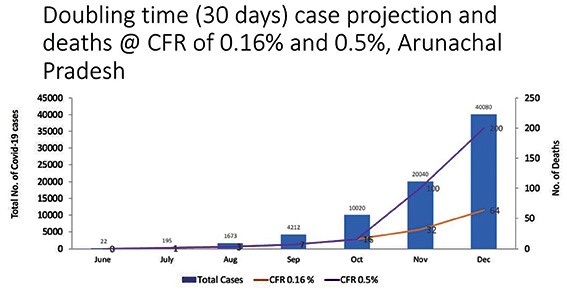 ITANAGAR, Oct 7: Since the first case of Covid-19 was detected on 30 April in Lohit district’s Medo, the state has seen an unprecedented spike in the number of Covid cases figuring at 11,267, and the health department says that “the worse is far from over.”

As per data released by the health department, based on doubling time of 30 days case projection and deaths, the numbers of positive cases are projected at over 40,000 cases by December with the case fatality rate (CFR) touching the triple-figure. (See figure)

According to a data prepared by the health department, as of 5 October, CFR at 0.16 percent is projected as 64 and 200 by December at 0.5 percent.

CFR is the number of the deaths divided by cases and the percentage is not static as there may be over or under estimation due to the number of undiagnosed yet infected and fatal cases, according to experts.

The state has recorded a total of 21 deaths, including a health worker who had no co-morbidity.

While Arunachal has carried out the highest number of tests per million in North East India with over 2,55,334 persons tested, the number of symptomatic cases and fatality rate too is increasing. The first Covid death was reported on 11 June. The number of deaths in October alone stands at four.

According to Health Secretary P Parthiban, the health department has completely moved its focus on clinical management to reduce the fatality rate in Arunachal Pradesh. This includes increasing the TRIHMS’ bed capacity from 40 to 200, and increasing the ICU beds in the TRIHMS from 15 to 40 in the next 15 days, besides increasing life-saving drugs stock.

‘Human behaviour is central to transmission of Covid-19’

The Arunachal Times (TAT) spoke to the state’s Integrated Disease Surveillance Programme’s Public Health Specialist, Dr D Taipodia regarding the case projections, case fatality rate (CFR) and ways, if any, to control the spiralling cases of Covid-19 in the state.

TAT: According to the health department’s projection, Covid-19 is going to get worse by the year-end. What possibly could stop the fatalities from increasing?

Dr Taipodia: The numbers seem alarming, but these are estimated projections considering the doubling time of the cases in Arunachal Pradesh and present CFR of 0.16 percent and a projected case fatality of 0.5 percent.

Even then, these case fatality rates are among the lowest in the country and the GoI goal is to keep the CFR due to Covid below one percent (i.e. if you have 10,000 cases, there will be 100 deaths if CFR is 1 %).

When there is large scale transmission, our aim is to reduce and control the CFR.

In this regard, there should be:

Early intervention and referral of cases so that there is no delay in initiating treatment.

Monitoring of cases in home isolation so that they can get early evaluation and treatment in case symptoms or oxygen saturation worsens.

Persons who suffer from any symptoms suggestive of Covid should not shy away from testing.

High-risk groups like the elderly and persons with co-morbid conditions need to be extra careful by avoiding crowds, staying at home as far as possible and get an immediate medical evaluation if they test positive for Covid.

TAT: From 22 cases in June to the projected 40,000+ cases by the year-end seems rather alarming. What should be done to stop or control the number?

Dr Taipodia: In the absence of a vaccine, the only way to control the ever-increasing number of cases is by changing people’s behaviour. Social distancing and universal mask/ face coverings are low-risk interventions that have shown to reduce transmission.

TAT: India’s CFR has been questioned for various reasons and some experts feel that it could be much higher. Is the case same here in Arunachal?

Dr Taipodia: No! All deaths in the state that were Covid-19 positive have been accounted for in Arunachal Pradesh.

TAT: What could be the possible reason for an increase in CFR in the state?

Dr Taipodia: We have to understand that due to the nature of the illness, there will be deaths and, therefore, people should not get complacent and should follow all precautionary measures religiously.

TAT: What should the common citizens do to control the spread of the virus?

# Understanding that this fight is not a battle only of the health department and the administration but a combined effort and responsibility of the common citizens also.

# Common citizens going around in public, with masks that do not cover their noses, can be considered equal to not wearing a mask.

# Policy-makers, influential bloggers or other social media leaders, local leaders, women and youth groups, religious and elders’ groups, local NGOs, volunteers, and people who have real-life experience with Covid-19 (those who have had Covid-19 or their family members have contracted the virus) need to become ambassadors for bringing about these behavioural changes.