ITANAGAR, Oct 8: A team of the Indian Army scaled Mt Kangto-6 last week. The peak is 20,700 ft above sea level, and is located in a remote and glaciated terrain in Arunachal, close to the line of actual control. 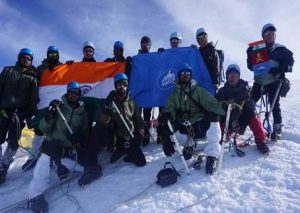 The 41-member joint expedition team, comprising Indian Army troops from the 4 Corps and members of the NIMAS, had been flagged off on 1 September.

Traversing a distance of 55 kms one way, the expedition team established seven intermediate camps en route. The team summitted the peak and hoisted the tricolor atop it on 2 October, when the nation was celebrating the birth anniversary of Mahatma Gandhi.

“The successful summit is testimony to the grit and professionalism of our soldiers, who are capable of operating at any altitude, under the most arduous condition, at all times,” a release from the armed force stated.