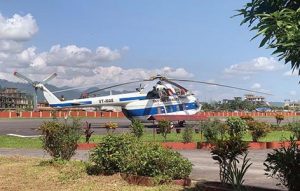 ITANAGAR, Oct 10: Passenger helicopter service in the state is reportedly affected following the expiry of the contract for one helicopter, the 1st MI-172 of New Delhi-based Sky One Airways Pvt Ltd.

Sources in the civil aviation (CA) department informed that the contract for the 1st MI-172 expired on 8 July.

Fresh tender for competitive bidding was floated on 28 August and the bids opened on 22 September. The sources informed that Sky One Airways and Thiruvananthapuram-based Thumby Aviation Pvt Ltd participated in the bidding.

“There are three separate tenders for three helicopters – two MI-172s are of Sky One and 1 Bell helicopter is of Global Vectra. Out of the two MIs, the contract for one MI got over in July. Fresh tender was floated and bids were opened on 22 September. The matter has been put up to the government to make a decision,” said CA Secretary Swapnil M Naik.

Reportedly, due to the Covid-19 restrictions and the monsoon, the absence of one helicopter has not had a big impact.

“Presently two choppers are available. There is not much pressure. Fact is that routine passenger service for the helicopter is suspended and people of those areas are facing inconvenience,” said an official who did not wish to be named.

An unverified source informed that, after the technical and financial bidding, the CA department has recommended Sky One Airways for the contract.

It is learnt that the contract for another helicopter – the 13-seater Bell-412 of the Global Vectra Helicorp Ltd, New Delhi – is expiring on 15 October. The CA department issued a notification for bidding on 5 October for competitive bidders, which is to be opened on 28 October.

Sources in the department also informed that Pawan Hans did not take part in the bidding as there is a restrictive clause in the bidding terms. On 4 January, 2017, the Chief Minister Pema Khandu-led cabinet decided that helicopter operators having major accident records (fatal accidents) would be rejected in the technical bidding.

There are a limited number of helicopter operators registered under the director general of civil aviation; thus, the state’s civil aviation department has few options to choose from.

Considering the communication bottlenecks, the hilly and tough terrains, and the vast geographical area of Arunachal, the ministry of home affairs (MHA) has been funding the operation of three helicopters to provide connectivity and transportation to remote areas under the subsidized passenger service scheme.

As per the subsidy norms, 75 percent of the net operational cost is being borne by the MHA and 25 percent by the state government, excluding the revenue generated by passenger fares. Currently, six northeastern states are operating helicopter services under the MHA’s non-plan subsidized scheme: Arunachal, Meghalaya, Nagaland, Sikkim, Tripura and Mizoram.

It is said that, after the discontinuation of the Vayudoot air services in the 1980s, the state government had introduced civil passenger service through Pawan Hans helicopters in December 1995 under the 75 percent subsidy scheme of the MHA.

Initially, the service was started with a 13-seater Dauphin helicopter of the Pawan Hans Ltd. Later, at the request of the state government, the MHA included another two MI-172 helicopters in the scheme.