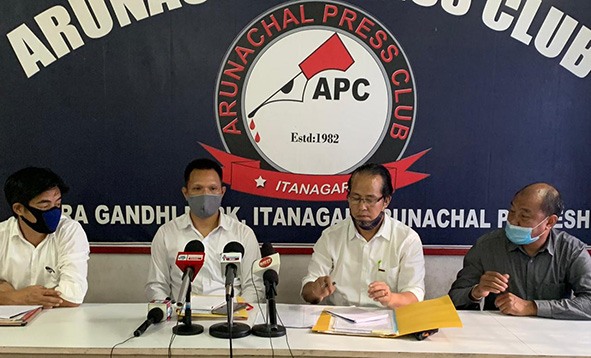 ITANAGAR, Oct 12: The Galo People’s Federation (GPF) on Monday squarely blamed highway executing agency M/s Shivam Pvt Ltd for the tragedy that occurred in Ego village in Leparada district on 17 September, when two people lost their lives, dozens were rendered homeless, and properties were lost due to massive landslides and flood.

Addressing a press conference here, GPF president Doya Boje claimed that the devastation caused in Ego was “a manmade disaster, due to haphazard earth-cutting in an ongoing highway construction under NHIDCL by M/s Shivam Pvt Ltd.”

A heavy cloudburst over Ego on 17 September caused landslides and flood which washed away at least 22 houses and numerous properties and paddy fields.

Boje said that the flood has left a trail of destruction in Dari circle, making life miserable for the residents as all essential services like electricity, drinking water supply and road connectivity have been snapped.

“Despite such a disaster occurring in the area, it is unfortunate that no government official initiated (any move) to restore the electricity and drinking water supply and other essential services, leaving them at the mercy of nature,” Boje claimed.

He further said that the body of one missing person, identified as Bato Doye, is yet to be retrieved and the Leparada district administration has called off the search operation and abandoned him.

“The chief minister being the PWD minister should visit the flood-ravaged area once to reassure the devastated people and take stock of the situation. Isn’t he CM of our people too?” said the GPF president, and demanded a special package of not less than Rs 10 crore for Ego village.

The GPF demanded that the government institute an inquiry community “to know the exact reason of the disaster,” and stated that the executing agency should be held responsible for its negligence.

The GPF further demanded that the government provide ex gratia payment of Rs 50 lakhs each to the nearest kith and kin of both the deceased, and also urged the government to direct the DA to ensure foolproof assessment of the total losses and the damages caused to movable and immovable properties.

GPF general secretary Reken Ingo also questioned why the district administration suspended the search for the missing person (Bato Doye). Ingo added that the DA has not communicated to any person or organization so far about its abrupt suspension of the search operation.

Ingo demanded that Shivam Pvt Ltd compensate for the loss of properties and lives in the incident. He claimed that the GPF had already cautioned the company about the threat of landslide due to random earth-cutting. “However, the company did not pay heed,” Ingo claimed.

He informed that during the incident, a college student, Jumken Doke, had rescued a three-year-old child who was trapped inside a room, and urged the state government to acknowledge her bravery by giving her a bravery award.

The forum also expressed resentment over “the state government’s apathy towards the deplorable condition of the Akajan to Bame road, via Likabali and Garu.”

It said the entire stretch of the highway is 98 kms and has been sanctioned under the NHIDCL. The highway is being constructed by three firms in different packages: M/s JKM Pvt Ltd, M/s Shivam Pvt Ltd, and M/s TK Engineer & Consortium Pvt Ltd.