ITANAGAR, Oct 15: The National Animal Disease Control Programme (NADCP) was launched in all the districts of the state on Thursday. 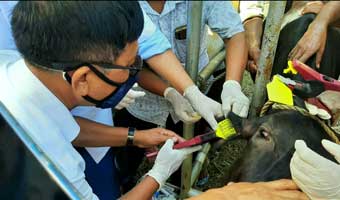 The NADCP is a nationwide government flagship programme under the animal health sector, and is a 100 percent centrally-aided and sponsored scheme.

As part of the programme, all cloven-footed livestock (cattle, buffalo, mithun, yak, sheep, goat and pig) will be registered for vaccination against foot-and-mouth disease (FMD) twice a year and all the female calves of four to eight months will be given a one-time vaccination against brucellosis.

The details will be uploaded to the information network on animal productivity health (INAPH) portal.

The programme was scheduled to be launched in Arunachal, along with the rest of the northeastern states, on 25 September. However, due to the delay in receiving ear tags and FMD vaccines from the government of India, the launch was postponed to 15 October.

In the first phase in Arunachal (from 15 October to 15 December), 3,45,600 cattle heads, including buffalo, will be registered and vaccinated, and the information uploaded to the INAPH portal.

Launching the programme at the central cattle breeding farm in Nirjuli, AHV&DD Minister Tage Taki advised the department’s officers and field staffers to “exert extra efforts to complete the task within 45 days, instead of 60 days.”

He asked the AHV&DD director to announce a cash prize with certificate for the field officer/staffer who performs the highest number of vaccination and registration of animals during the stipulated time period.

The minister advised the department to prepare a “categorized farmers’ database,” which he said “is much-needed for initiation of any livestock-related project and economic assessment.”

The minister was accompanied by AHV&DD Secretary Dani Salu.

Live demonstration of ear-tagging, animal registration, vaccination and uploading data to the INAPH portal was done by the officers of the department.

In West Siang district, DC Moki Loyi launched the NADCP at Rigo village and exhorted the department to “implement it in letter and spirit, maintaining Covid-19 SOP, as people-centric development cannot be halted in the name of pandemic.”

The district administration will issue circulars to all the GBs of the district to assist the agencies in such works and in geotagging, which are said to be delayed due to the restriction on entry adopted by some of the villages.

The DC said that “the concern is over FMD among mithuns and cows, and the department should be in a position to wipe out the disease through such programmes.”

He advised the locals to adopt dairy farming, and assured to distribute sanitizers and masks free of cost to the villages soon.

The department will provide vaccine for FMD, carry out ear-tagging, and issue animal health cards and registration to evolve a detailed information network for animal productivity and health.

In Siang district, DC Rajeev Takuk launched the programme in Boleng by vaccinating and ear-tagging a milch cow.

Stating that the animal husbandry sector, “be it poultry, piggery, dairy, or other ancillary activity related to it,” is a big industry, he urged the farming community to avail the full benefit of the programme.

Among others, DAH&VO Dr Karik Mize and officers from the veterinary and allied departments attended the programme.

“We should put our effort and knowledge into ensuring productivity in all sectors for sustainable economic development of the state,” the DC said.

DAH&VO Dr Dagge Riba spoke about the requirement of milk in the Itanagar capital region, and appealed to the farmers to “work towards improving milk production under the CM’s White Revolution Programme.”