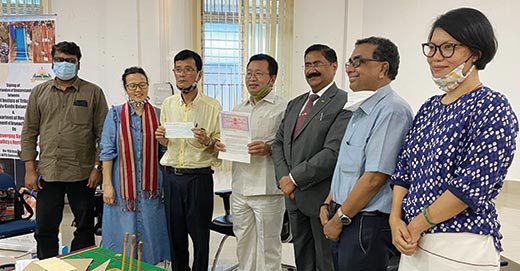 RONO HILLS, Oct 16: The Arunachal Institute of Tribal Studies (AITS) of Rajiv Gandhi University (RGU) has signed a memorandum of understanding (MoU) with the state’s research directorate for carrying out extensive heritage documentation and formulating a state culture policy.

Terming the MoU historic, Prof Kushwaha said that traditional knowledge by itself is very structured and contains within itself tremendous wisdom. “There is a need to document and share that wisdom today,” he said, and urged the AITS and the research directorate to “let the project be dynamic and evolve as it progresses.”

Prof Mitra said the MoU “is a visible sign of how the RGU is fulfilling its commitment to playing a proactive role in the socioeconomic development of the state.”

Saluting the early research done by Verrier Elwin, Parul Dutta and other pioneers in the research department, he said that the project should carry the same spirit.

RGU Registrar Dr NT Rikam commended the vision of the project and assured of the university’s fullest support to it.

Stating that flagging intellectual property, cultural and language endangerment are the cornerstones of the project, AITS Director Prof Jumyir Basar said that, in addition to the research directorate, the AITS will also collaborate with the communication resource centre of RGU’s mass communication department, led by its HoD (in-charge) Moji Riba, for effective implementation of the MoU.

Research Director Batem Pertin said the collaboration “is a landmark moment not just for RGU but for the department itself.” He later handed over a draft for Rs 45,24,000 as the first installment of the project funds.