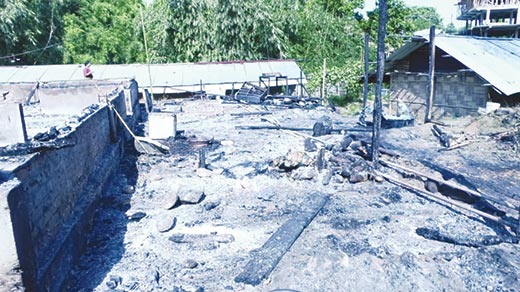 ITANAGAR, Oct 17: A mob set fire to the SPT house of one Tame Takiang in Lorr Putung village near the zoo area here and fired several rounds of gunshots in the air on Friday evening when the house owners were away.

As per the house owner’s wife, Tame Aniya, who was out of the house but nearby when the incident occurred, “a mob of about 180 people surrounded our house at around 7:40 pm and started firing shots in the air. They went inside the house and damaged the furniture and other items, and I ran away from the place.”

On being asked whether she had any idea as to the reasons behind the attack, she said, “I don’t know why they would make such an attack. I don’t know if there has been some misunderstanding between the attackers and my husband.”

On Saturday, the villagers of Lorr Putung held a meeting, wherein they decided to demand that the Itanagar police station OC arrest the culprits involved within one week.

As per sources, “there is an old land dispute between the alleged arsonists and Takiang. A family member of the alleged accused was also brutally assaulted with a machete (dao) on Friday morning itself near Gohpur Tinali. There is CCTV footage of the attack where Takiang is also involved, and this act of arson was probably in retaliation to that attack.”

In the meantime, investigating officer R Kamsi informed reporters that the police here have identified some of those involved in the arson in Lorr Putung.

“We have found shell casings and other items from the site of incident. We have also identified some of the persons involved. Basically, it is a long pending land dispute. As law abiding citizens, I request those involved in the arson attack to surrender before the police at the earliest,” Kamsi said.