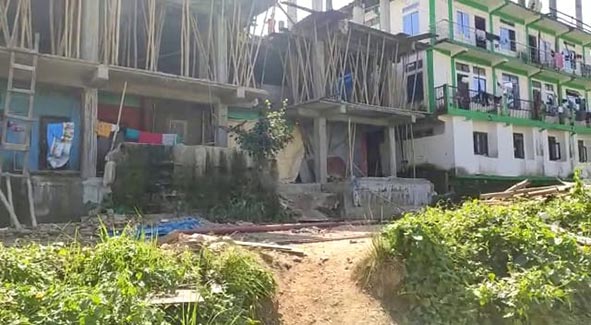 ITANAGAR, Oct 19: Following a complaint on Monday over the dismantling of a large part of the boundary wall of IG Park and alleged illegal construction at the spot, one Dr Rayum Ronya has been directed by the additional district magistrate (ADM) to remove the building materials and reconstruct the park’s boundary wall within 48 hours.

Earlier in the day, the Save Arunachal Save Indigenous (SASI) organization had submitted a complaint to the Itanagar divisional forest officer of the social forestry division against unknown person(s) for dismantling the wall of the park near the Lower C Sector entry gate and carrying out illegal construction inside the park’s premises.

Speaking to reporters, complainant and spokesperson of SASI, SD Loda informed that the organization approached ADM Talo Potom regarding the matter, who promptly visited the spot with a team. It was noted that there has been about two metres of encroachment beyond the IG Park wall, and Dr Ronya was identified as the owner of the building materials.

During the meeting, Tatung informed that “there is damage of the wall and building materials have been dumped on IG Park.”

However, Dr Ronya informed the officers that “there was a crack on the IG Park wall and some portion of the wall was already damaged while the rest of it had collapsed naturally.”

The range officer on his part contradicted Ronya’s statement and said that “the wall cannot fall by its own, except by human intervention.”

After gathering the facts and statements, the ADM directed Dr Ronya to remove the building materials and reconstruct the wall within 48 hours “as per the direction and satisfaction of IG Park’s range officer.”

The range officer has also been instructed to submit the ‘completion report’ immediately after 24 hours, failing which an FIR will be registered at the Itanagar police station.

Later, Loda said that he and his team noted the encroachment when they had recently gone to conduct a social service at the park.

He also suggested that the divisional forest officer install CCTV cameras in and around the park to check unauthorized occupation and felling of trees.