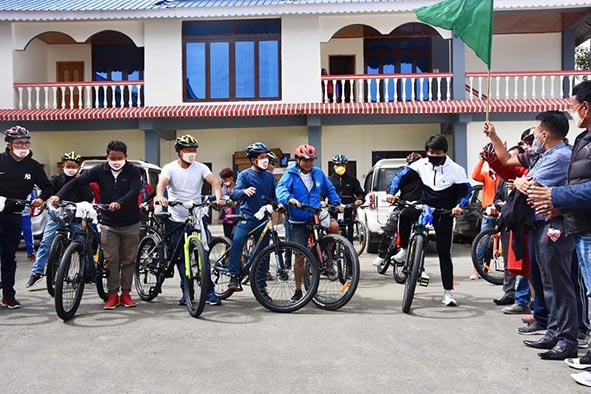 The MTBs’ distribution was aimed at creating health consciousness

among the people, as part of the Fit India movement.

“Cycling can prove to be a major game-changer to tame global warming, check air pollution and protect our environment,” he said, and urged everyone to choose bicycles as the mode of transport for short-distance movement.

Tashi also urged the participants to create awareness on drugs.

“Drugs are taking a deadly toll on our youths and making massive influence over them, which is a serious subject of concern. Intake of intoxicants have proved to be very addictive and once anyone falls prey, it takes humongous efforts to get away from its malicious clutch,” he said, and advised the youths to shun intoxicants and channel their energy into nation-building.

Later, Tashi spearheaded a cycling expedition through the township to propagate the Fit India movement and encourage sports.

The Lumla legislator had distributed nine MTBs in 2019.