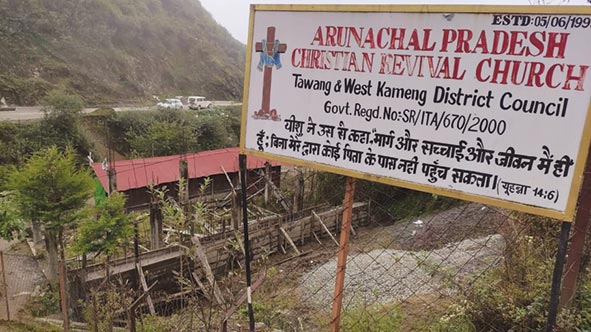 ITANAGAR, Oct 21: Chief Minister Pema Khandu has continued to maintain silence on the Tawang church fiasco even as the Arunachal Christian Forum (ACF), a powerful conglomeration of various denominations of churches, has said that it will organize a ‘peaceful protest’ on 2 November in Itanagar.

On 9 October, the ACF had submitted a memorandum to the CM’s office, urging him to resolve the Tawang Christian Revival Church issue at the earliest and had said it would be compelled to launch a democratic stir if the issue is not resolved.

The Itanagar capital region (ICR) administration did not allow the ACF to organize the protest at the civil secretariat as originally sought by the forum.

Instead, ICR Deputy Commissioner Komkar Dulom has given them permission to organize the protest at the tennis court in IG Park following all the Covid-19 protocols, including wearing of masks and maintaining distance on 2 November.

The Tawang police had arrested Tawang Revival Church pastor Joseph Singhi, sparking protest from the Christian community of the state.

Singhi was reportedly arrested on the basis of an FIR lodged by the district land revenue & survey officer, allegedly for illegally constructing the church.

Meanwhile, talking to this daily, an ACF member expressed sadness over non-responsive attitude of the state government.

“We are not adamant on conducting protest and are still hopeful for a solution,” said the ACF member, adding that the organization has high expectations from the chief minister to resolve the issue.

Further, the member said that the church issue “should not be made out as a fight between religions.”

“We respect the sentiments of fellow Arunachalees and have regard for all the religions. We are only seeking what we believe is our right – to have a place of worship in Tawang. Further, we fervently appeal to everyone to not make it a communal issue,” he added.