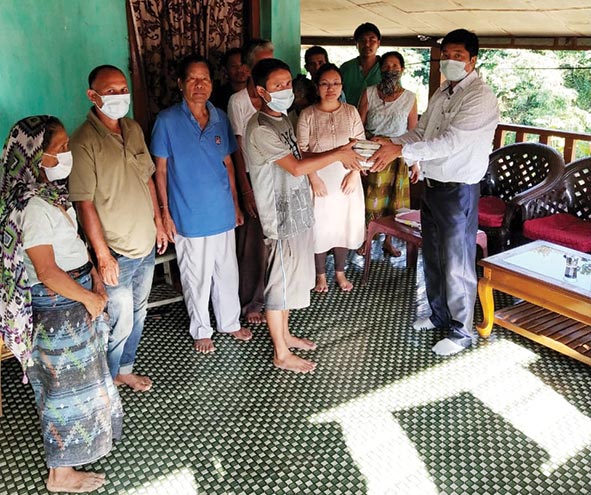 BASAR, Oct 21: The Lepa Rada district administration has on Monday last, provided an ex-gratia of Rs 4 lakh each to the families of the two persons who had lost their lives during the 17 September cloudburst that caused massive destruction in Lepa Rada district.

The two persons who lost their lives during the flash floods were late Purna Bahadur Thakuri (70) and late Bato Doye (42).

Basar EAC Murnya Kakki informed this daily on Wednesday that the administration also provided relief amounts to the 15 people who suffered injuries.

“They were all given an amount of Rs 12,700 each. A total amount of Rs 1,01,900 has been distributed among 22 families whose houses were completely damaged in the incident. A relief amount of Rs 3,800 each was also provided to people in Dari and Ego areas of Basar for clothing and utensils,” the EAC added.

He informed that over Rs 9 crore worth of infrastructure was damaged and all departments after completing their assessments have submitted reports to the state government.

“Presently, restoration work of all utility services like power and water supply is going on. The electric poles damaged during the flash floods and landslides at Dari circle have also been restored with the help of villagers. Road restoration work is also going on in full swing,” the EAC informed.

Meanwhile, the disaster management department also informed that it has so far paid Rs 33, 09,600 through the DDMO as relief payment and ex-gratia to the victims.

Secretary Dani Salu said that an inter-ministerial central team from the Centre will visit Arunachal Pradesh to assess the damages due to monsoon and that the department will suggest that the team visit the cloudburst-affected Lepa Rada.