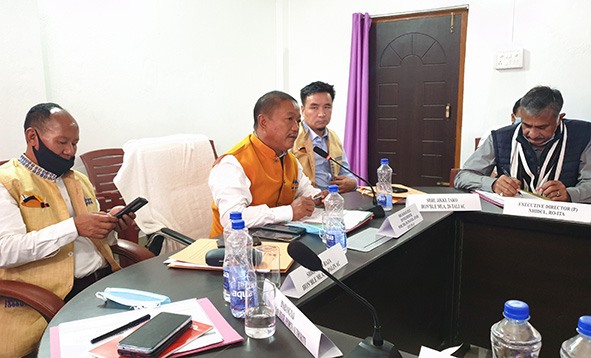 PALIN, Oct 28: Home, RD and IPR Minister Bamang Felix, while reviewing the work progress of Joram-Koloriang Trans-Arunachal Highway (TAH), said that “development has been badly affected in Kurung Kumey and few parts of Kra Daadi because of lack of roads.”

He compared it to a total lockdown.

Felix called for an action plan as the work has already been awarded and new contractors have also been appointed.

He said that “the NHIDCL will be answerable to the government” and that “whatever support is required will be provided.”

Saying that the road was not fit for hatchback cars, Felix directed the NHIDCL to give progress reports every 15 days.

Tali MLA Jikke Tako also said that there should be a timeline for completion of the road, while Palin MLA Balo Raja suggested that nodal officers monitor the progress of the road.

NHIDCL Executive Director Col Sunil Kumar said that though the work started in 2017, progress has been slow and that a time line is being prepared.

GM, Col Prabhakar Kumar said that the road is important for defense purpose as well as for development of the area, and urged the Kra Daadi and Kurung Kumey administrations to issue notifications to stop encroachment of the right of way.