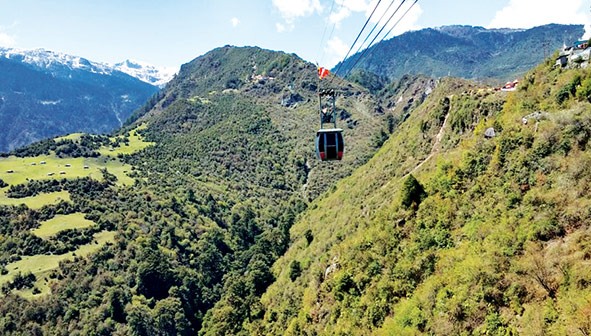 ITANAGAR, Oct 29: Introducing ‘parachute projects’ in the works departments in Arunachal by influential policymakers in the government and the bureaucracy is not a new story.

At a time when the tourism industry has been hit the hardest by Covid-19 globally, forcing all major activities to shut down, Chief Secretary Naresh Kumar has allegedly proposed setting up ropeway (cable car) projects in two locations in Arunachal: the Jang waterfall (Nurang fall) in Tawang district, and in the Dong valley in Anjaw district.

Mhetre in his letter referred to the discussion with the CS during a videoconference purportedly held on 1 June. Later, the chief secretary pushed for the projects in two locations – the Jang fall and Dong valley – on 10 June. Subsequently, on 9 September, the planning department placed Rs 35.40 lakhs for carrying out a pre-feasibility study on developing ropeway projects at the two locations.

An expert team from the IPRCL will carry out a survey of the locations and prepare the pre-feasibility study report. The survey will include physical inspection of each of the ropeway sites and preliminary estimation of ridership, based on secondary traffic data, assessment of the preliminary financial validity of each ropeway project, etc.

The IPRCL in its original proposal unmindfully proposed a ropeway project at the EWS, which would become a bone of contention with the state’s wildlife board.

A highly placed source confirmed that the projects were proposed “as desired by the chief secretary.” However, the tourism department has to take up with the finance department the matter of final release of fund.

On being contacted, Chief Secretary Naresh Kumar remarked, “Check with the department. I believe no fund has been released.”

Official sources informed that, due to the shrinking economy amid the pandemic, the tourism department is primarily focusing on economically viable activities, such as marketing the state’s exotic destinations and adventure tourism to domestic tourists as the main consumers to rebuild the tourism business.

The department is also focused on high-value and niche tourism activities such as hiking, angling, rafting, trekking, bird-watching and butterfly-watching.

It is worth mentioning that the ropeway (cable car) in Tawang, which connects the Tawang monastery and the Ani Gompa (also called the Thukje Chueling nunnery), 10 kilometres off Tawang town, cost Rs 330.89 lakhs. The work began in February 2007 and was completed in September 2010. The total length of the ropeway is 1,184 metres and the travel duration between the two terminals is approximately 8 minutes.

The then president of India, APJ Abdul Kalam had laid the foundation stone of the project on 14 October, 2002. Four years later, in 2006, a Kolkata-based private company, M/s Damodar Ropeways and Construction Ltd, started the construction under the state PWD, funded by the DoNER ministry under the NLCPR.

It is said that the tourism department annually incurs approximately Rs 75 lakhs on maintenance of the Tawang ropeway, while the ropeway itself generates meagre revenue.