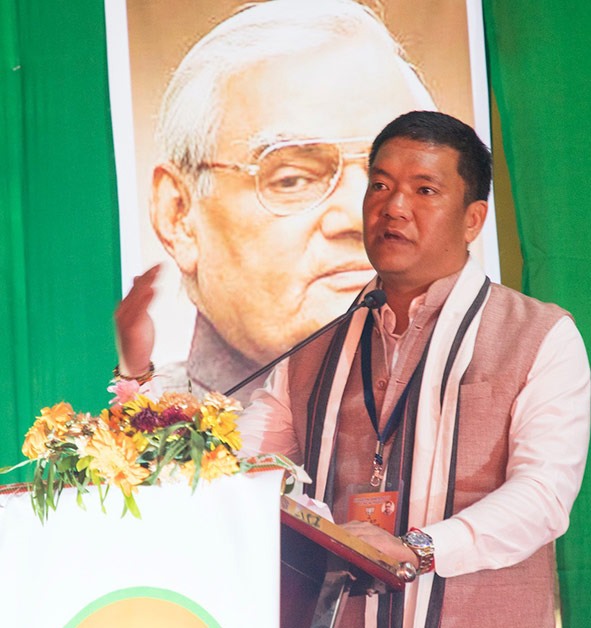 ITANAGAR, Oct 31: The BJP’s ideology, ideals and values should reach the grassroots, and so must all schemes and programmes of the central and state governments, Chief Minister Pema Khandu said.

He was addressing a ‘training of trainers’ programme organized here by the state BJP on Saturday.

“Veteran party workers and legislators have the prime responsibility to spread the words of achievements made by the government since it came to power at the Centre as well as in the state,” the CM said.

Reiterating that Arunachal is a unique state demographically, he stressed that a pan-Arunachal attitude should be adopted by the party workers “and take along each community and region on the path of progress.”

“Training refreshes our focus and rejuvenates our ideologies.

It also renews our enthusiasm to achieve goals in line with our ideals and values,” he said.

“We are lucky that we are in a party which is known for its discipline. We must live up to our party ideals and values. Only then we will be able to serve the society and usher development,” he said.

Khandu urged party workers to analyze the work culture of the present government and the earlier ones. He claimed that a difference could be clearly witnessed and owed it to the BJP’s ideology of ‘country first, party second and individual last’.

“Only a party like BJP can change the wheels of fortune in a state like ours. Therefore we need to strengthen our party’s foundation in the state, so that Arunachal can progress at a faster pace in the right direction,” he said.

Hinting that local rural and urban body elections are to be held soon, the chief minister said the local government bodies are of extreme importance for grassroots level development, and assured that the government would further strengthen the local bodies.

“With BJP in power, expectations of people have soared high. It is our responsibility to synchronize and deliver. Be it of the government or the party, our goals are same – to bring development with rule of law. We have no other option but to meet the people’s expectations,” Khandu added.

He also recalled the contributions of veteran BJP workers who, when the Congress was at the helm, remained faithful to the party and worked silently. He lauded their hard work, “because of which, the BJP is running the government now.” (CM’s PR Cell)