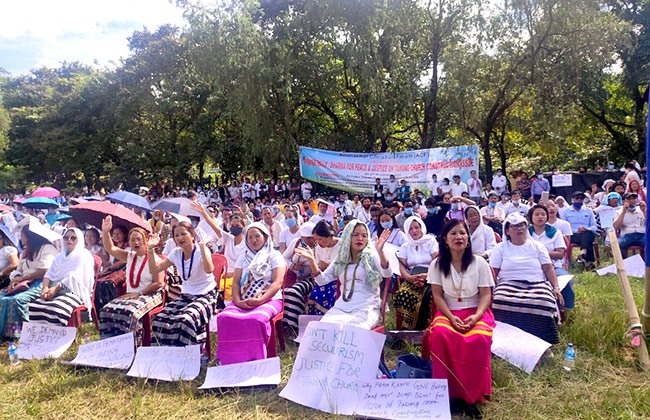 ITANAGAR, Nov 2: Hundreds of people belonging to different denominations of the Christian faith in the twin capital, including Doimukh, staged a sit-in protest at IG Park here on Monday, under the aegis of the Arunachal Christian Forum (ACF), demanding “justice for Tawang church.”

The sloganeering protestors demanded that the state government approve land allotment for construction of churches in Tawang.

On 6 October, Tawang Revival church pastor Joseph Singhi was arrested by the Tawang police on the basis of an FIR lodged by the district land revenue & survey officer, allegedly for illegally constructing the church. The incident sparked widespread condemnation from the Christian community in the state.

Singhi was later released on bail and the statements of eight other members who had accompanied him were recorded by the police.

Addressing the protest rally, ACF president Toko Teki said that the Tawang church issue “is not a confrontation with Buddhist brothers and sisters of Tawang and other parts of the state.”

“Arunachal Christian Forum does not believe this issue is Buddhist versus Christian as a few people are trying to paint on social media,” said Teki.

“We have no intention to convert Buddhism into Christian and turn Tawang into a Christian district. We just need a place of worship in Tawang. There are Christian government employees, even health workers, who need a place for worshiping. That is our democratic right,” he said.

The ACF president further said that the Church is committed to maintaining peace and brotherhood in the state. “However, if our democratic right is denied, we will continue to fight,” Teki said. “We have submitted enough memorandums to the government but yielded no result, which compelled us to stage a dharna today,” he added.

Teki claimed that the government “is mooting to constitute a high-power committee to resolve the issue,” and added that the committee’s members would be from a “neutral party, without associating Christianity and Buddhism.”

“If high-power committee recommendation turns out unsatisfactory, we will continue our movements in every district headquarters across the state,” Teki said. He also claimed that the Tawang district administration had sent the allotment file for approval from the government two years ago.

The church is located behind the district planning officer’s quarters in AIR Colony in Tawang. The Christian community in the district is claiming that they have been occupying the plot since 1999 and the church was built in the same year. It is said that they had applied for land allotment, which is reportedly not approved yet.

The administration had issued a notice on the basis of the Supreme Court direction of 29 September, 2009, that no unauthorized construction shall be permitted in the name of temple, church, mosque, gurudwara, etc, on public streets, public parks, and other public places.

The DA reportedly invoked Section 4 (1) of the Arunachal Pradesh Public Premises (Eviction of Unauthorized Occupant) Act, 2003, after the pastor allegedly failed to comply with the order.

It is said that on 27 October, 2003, the then APCRCC executive secretary, Toko Loma had submitted a representation to the then chief minister Gegong Apang, pleading for land allotment to build a church in Tawang. Loma claimed that the people of other faiths have their places of worship, like temple, monastery and mosque, in Tawang but the Christian community living in Tawang have no place of worship. Reportedly, Apang had asked the district administration to consider the representation.

There is a blanket ban on land allotment in Tawang for a decade and more than 200 land allotments issued to private and public parties had to be cancelled in 2007-08 after the district’s students’ union raised the issue.